"I am yours and you are mine, from this day until the end of my days"

We meet Sue and Paul who had a Game of Thrones inspired wedding at Ettington Park Hotel in Stratford-upon-Avon. 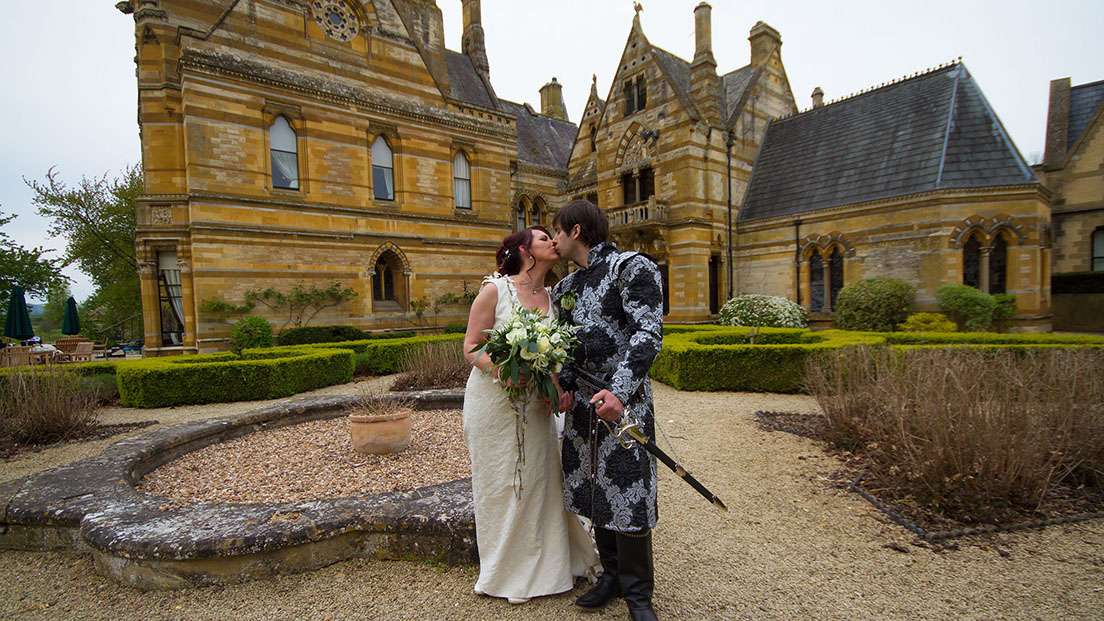 “We always knew we didn’t want a traditional wedding day and it was when we viewed Headingham Castle as a potential wedding venue that our theme started to take shape as we saw some Knights of Middle England there. However when we drove up to Ettington Park Hotel Paul said “this is where we’re getting married and it has to be a Game of Thrones theme!” We hadn’t even gone inside yet!

The hotel is the perfect wedding venue with a difference, it has towering turrets, colourful brickwork and classic arched windows. The team at Ettington were so accommodating with all our requests; we thought we may have been pushing our luck when we asked about having knights on horses jousting in the grounds, but nothing was too much trouble. 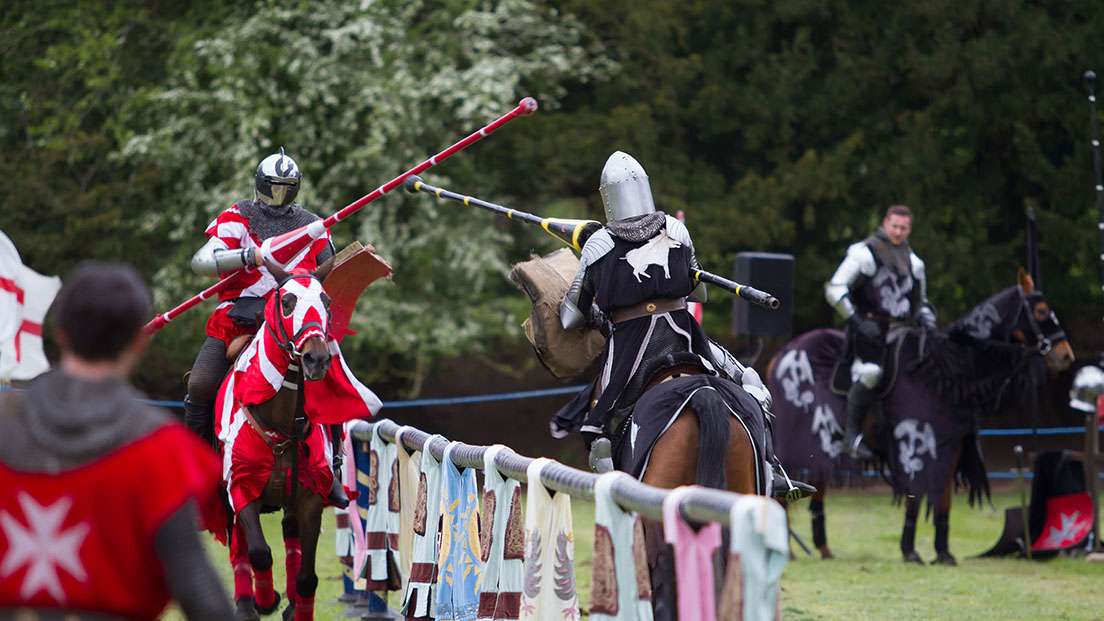 We decided on a spring April wedding and we were so lucky that the weather held for us. Because of the theme, suits were banned and we were so pleased that so many of our guests got really involved too, some of the costumes were amazing. 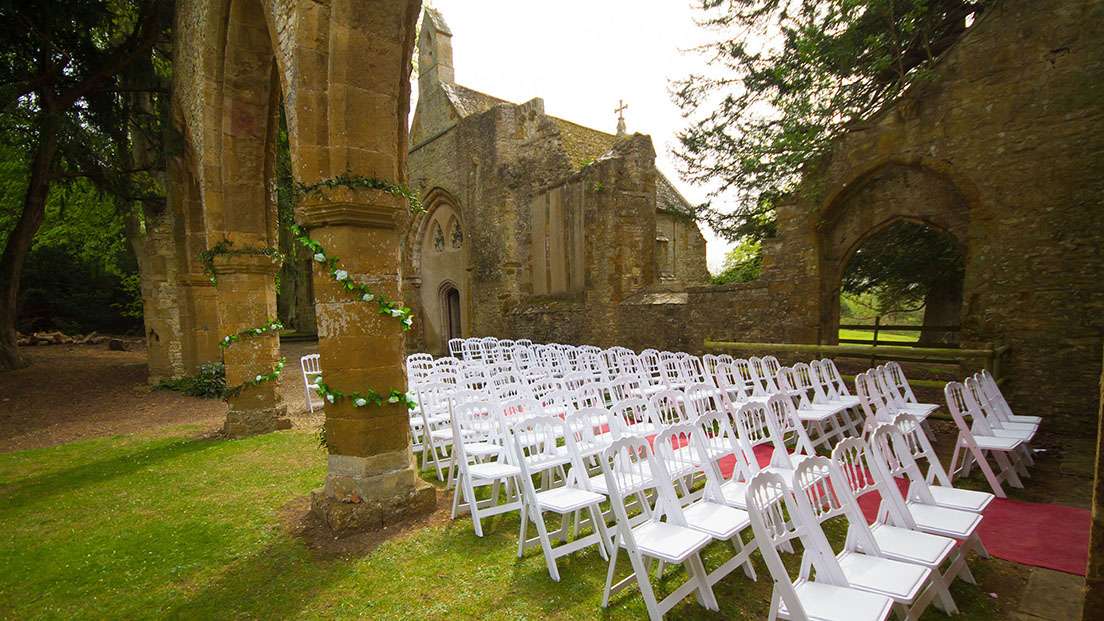 We had an outside ceremony in the Bell Tower which is extremely unique and our registrar was fantastic weaving Game of Thrones references into it. The grounds around the hotel are stunning and we organised a sword fight during the drinks reception to keep everyone entertained, the knights were Game of Throne characters too! There was archery for everyone, kids and adults while we were having photos, which was such a hit. 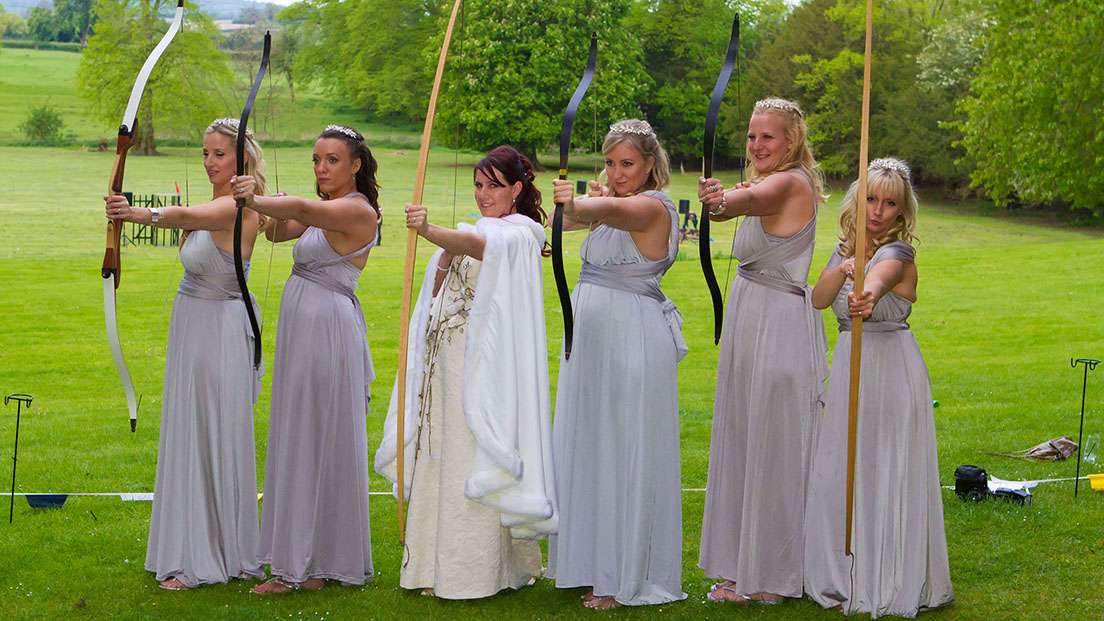 We moved inside for our wedding breakfast in the Long Gallery, it’s a spectacular room that runs the full length of the building with both sides lined by beautiful wood panelling and bookcases so it also fitted with the day perfectly. The food was amazing and while the adults had dinner we hired a mobile crèche to look after the kids. 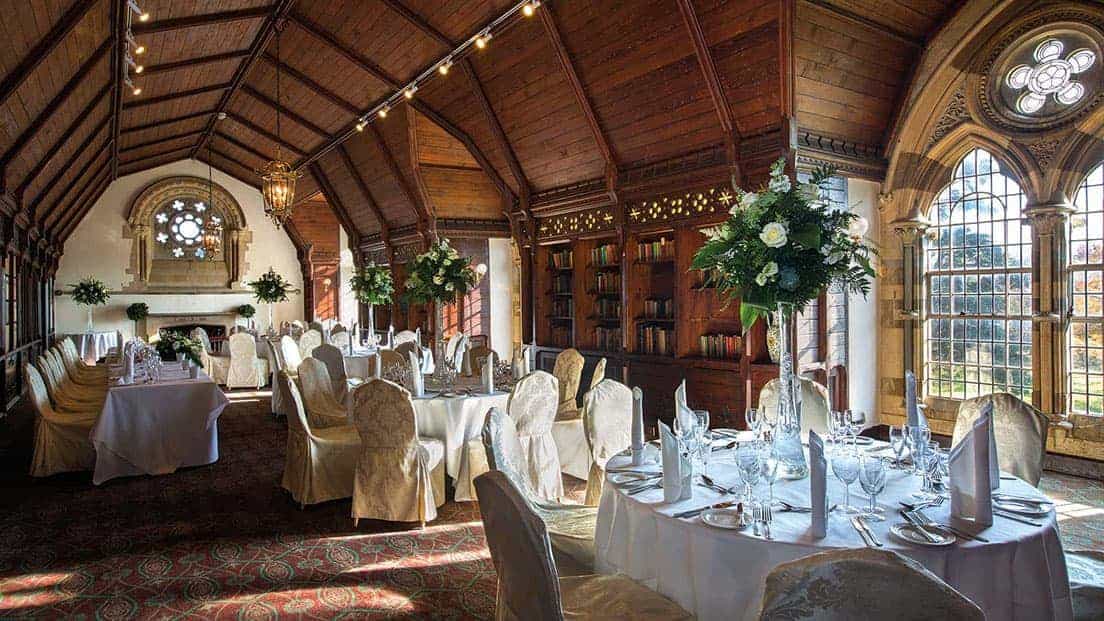 After dinner we had a Knights of Middle England jousting show which was amazing, they even kidnapped one of our guests as part of the act which was priceless. I had to get on one of the horses for a photo – I hadn’t really thought about how hard that would be in my dress though! The whole wedding party performed a medieval routine with us for our first dance; it was such fun learning it and all the practicing with our loved ones. 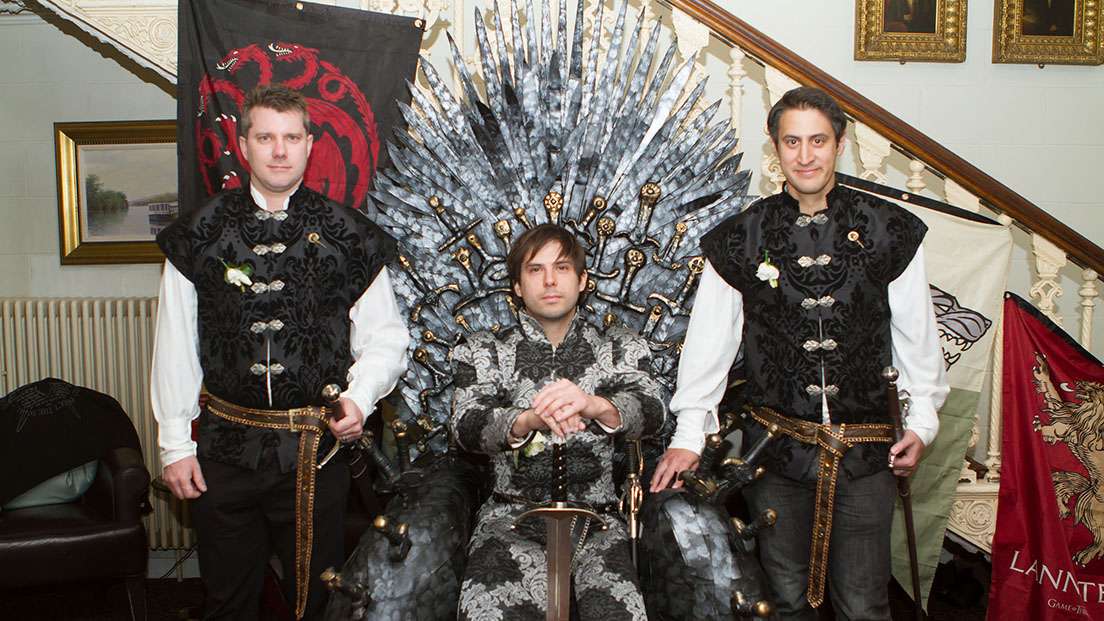 As a surprise for Paul I hired an iron throne which was our medieval version of a photo booth – the photos are brilliant! My best friend flying in from Hong Kong for the weekend was the icing on the cake. 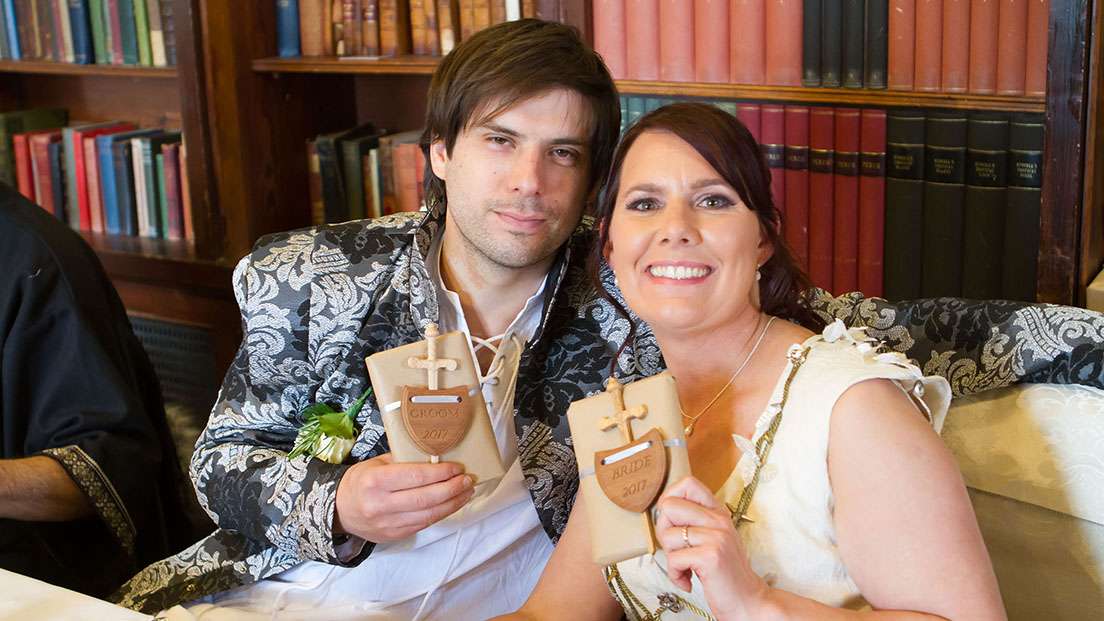 We couldn’t have organised the day without our friends and family’s support and input.  All the small touches were also Game of Thrones inspired, the table favours were little leather bound books with wooden swords and shields and the guest’s name engraved on them handmade by my dad. The best men and ushers waistcoats were beautifully made by a family friend. 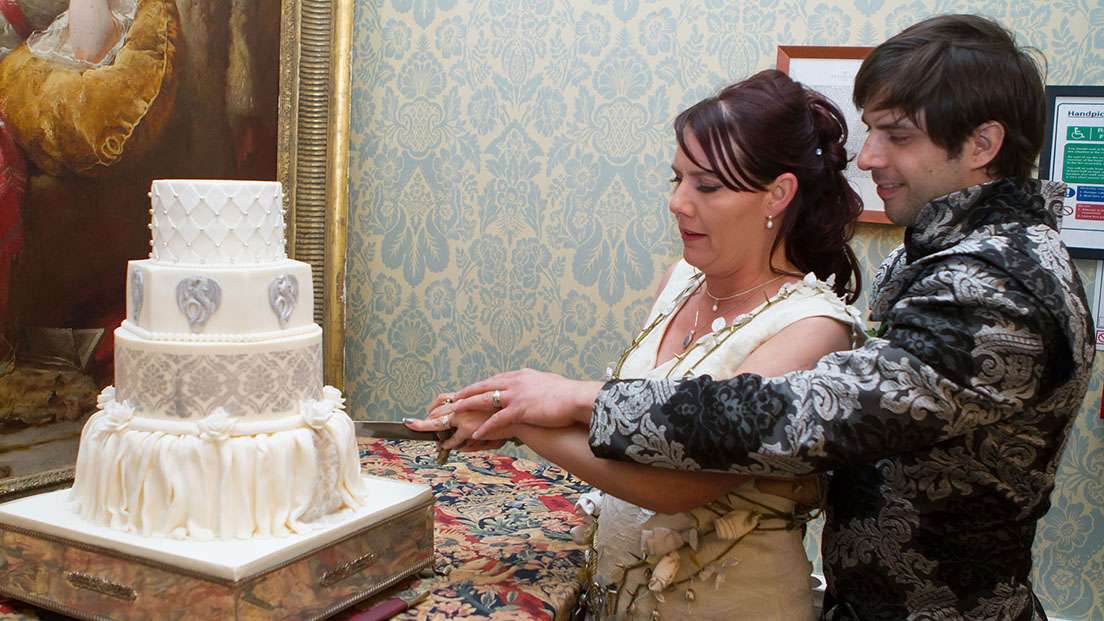 The cake was also made by a friend, it was probably the most stunning looking and best tasting cake I have ever had. 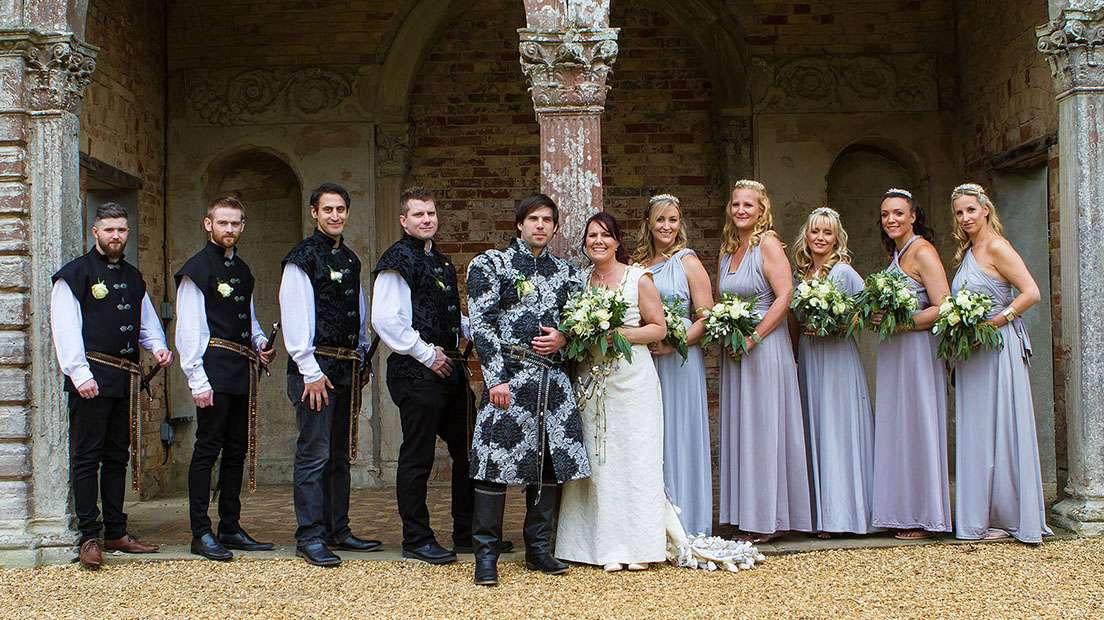 Etsy was perfect for finding our wedding attire, the groomsmen, page boy, father of the bride coats were custom made in America, Paul's coat was a copy of Joffrey’s coat seen in the series. My dress was also custom made in Canada and is a copy of Marjorie’s. The flowers were designed and made by a freelance lady Abbie Digweed and they were exactly what I wanted she even got hold of antlers for the top table. Amazing. 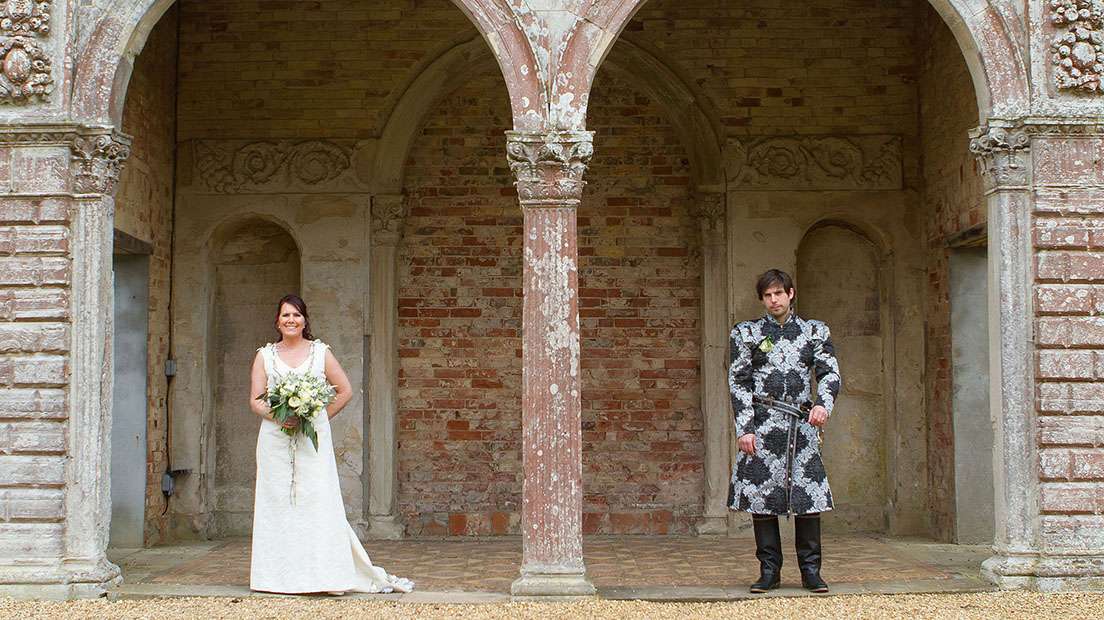 Our wedding was a dream come true, the staff at Ettington were superb, the food delicious, nothing was too much trouble and the day went without a hitch was unbelievable considering everything that was planned for the day – it ran like clockwork.”