Achieving the Dream Wedding on a Budget

There are plenty of ways to cut down on your costs when planning a wedding and still have a relaxed, fun and perfect day, as Tara and Steve Purchell discovered at Audleys Wood Hotel, Basingstoke.

Wedding costs can spiral out of control quickly. In fact, the average cost of ceremonies and receptions is going up and up – according to a new survey of 4000 brides carried out by hitched.co.uk, the average wedding in the UK now costs £27,161. That is the highest it has ever been and up almost 10 per cent from last year, however celebrating in style does not have to break the bank. There are plenty of ways to keep costs down and still have the fairy tale day you dreamt of – as our couple (both 28-years old) did. 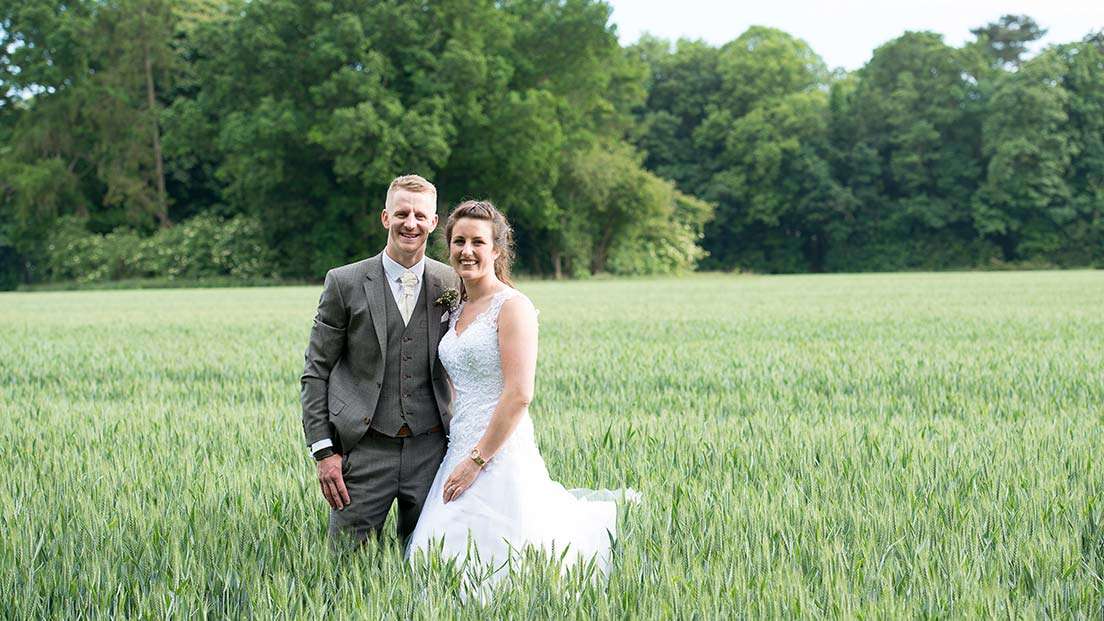 After taking a year out to travel, Tara, trainee veterinary nurse and Steve, self-employed electrician, really wanted to tie the knot but were worried that funds were a little tight. “We were sat in a coffee shop with my mum umming and ahing whether we could afford to get married at Audleys Wood, which we had fallen in love with having been to a friend’s wedding there. In the end we threw caution to the wind and decided to have a look,” explained Tara. By complete coincidence, there was a wedding fair on that day. Steve had suggested to Tara that it would be a really cool idea to get married on the date they met nine years ago – 28 May, which fell on the weekend. “Amazingly there was a late availability deal for the 27th. They were also able to adapt their Fairy-tale Wedding package for us, so we decided to go for it. 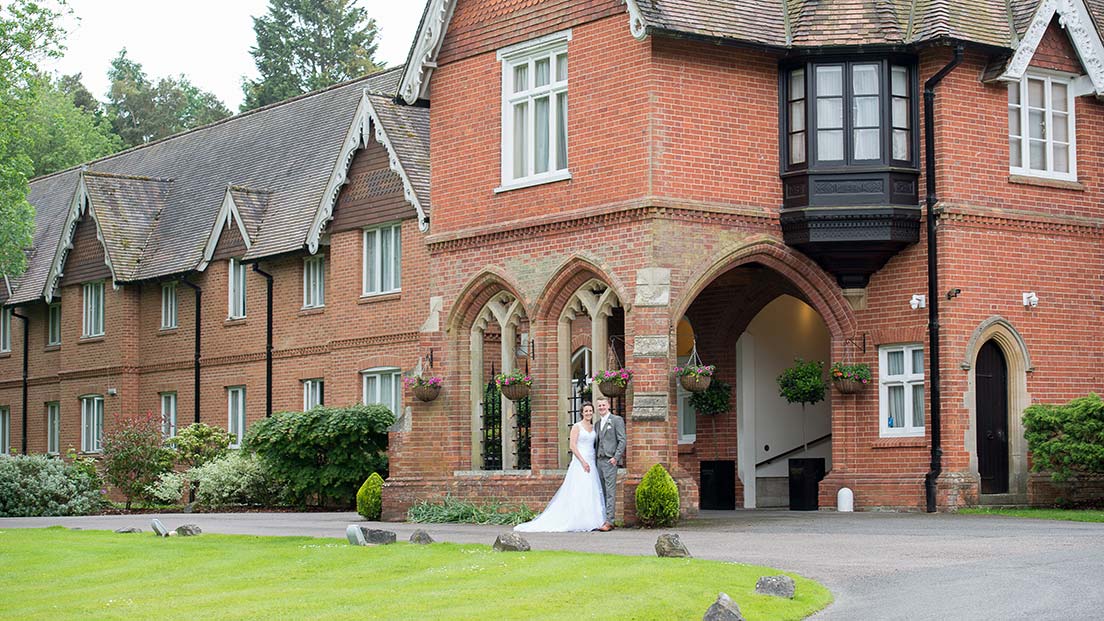 “Being outdoorsy people we loved the fact it was surrounded by woodland and acres of private grounds – the views are just incredible. The hotel itself, a gorgeous Victorian hunting lodge, also had a lovely rustic charm to it and felt like home – all of the staff are so welcoming. We looked at Ufton Court, and attended a few other venues as guests of other weddings, but Audleys Wood ticked all of our boxes,” added the couple.

Another big factor was location. The venue was less than ten miles from the couple’s home in Tadley, Hampshire, and not too far for their family and friends who live in Reading. By picking a venue with beautiful character features that they both loved and suited the kind of wedding they were after, it meant that they could make savings on another element, too – décor. 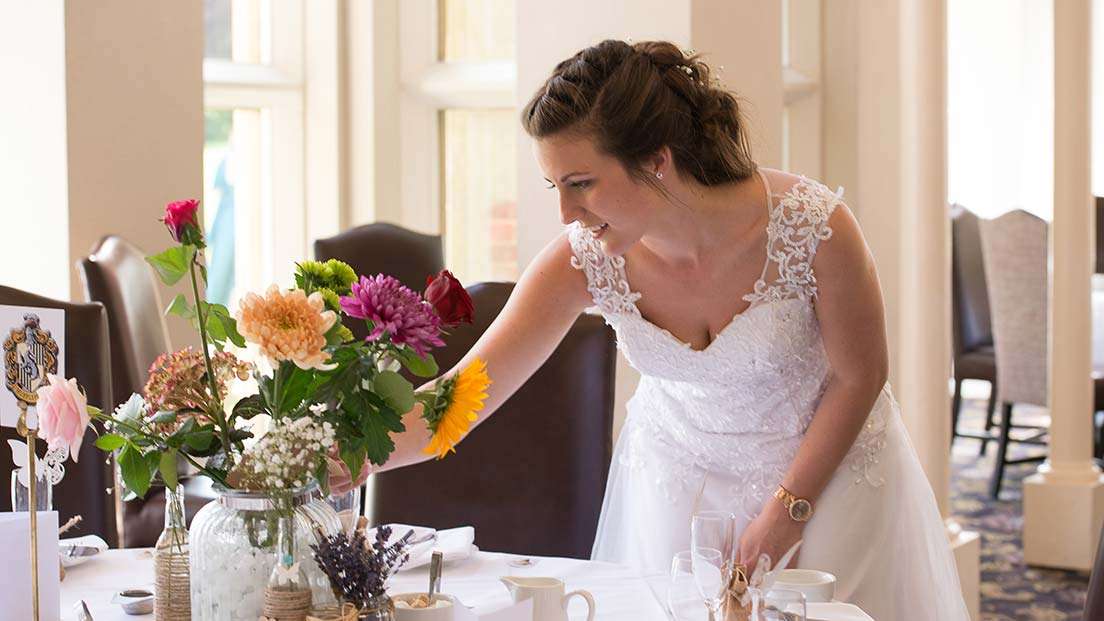 Tara takes up the story: “We thought it would be sacrilege to cover up the beautiful décor that was already there, plus we are not very materialistic people, so we did not have any chair covers and table clothes, huge centre pieces or props.” Instead, Tara and various family members made their own decorations. For example, miniature wine bottles, wrapped in natural woven rope, and lace-covered jam jars, were adorned with wooden love hearts and butterflies and then filled with gypsophila and lavender. The favours – made by her mum – were hessian bags similarly decorated, but chock-full of sweets and little keep sakes.

“Each table then had a large jar filled with colourful water beads for each of the guests to put their own flower in. When we sent out our invites we also included a label, which we asked our guests to fill in with what they picked and why,” explained Tara. Steve came up with the idea to make their guests feel they had a part to play in the wedding – it also provided a great talking point at dinner. 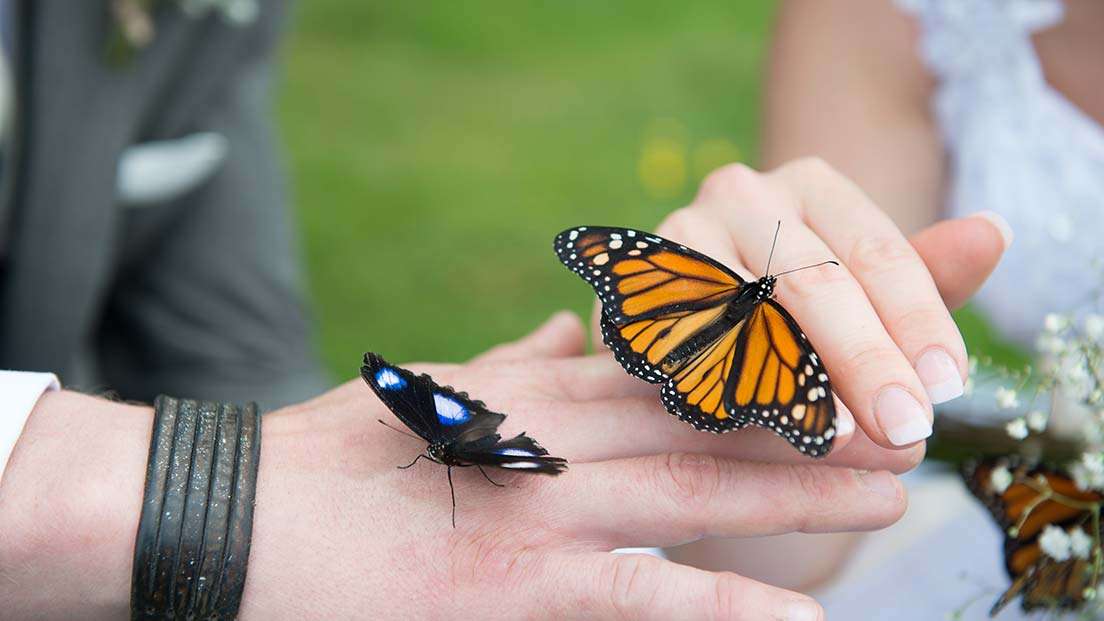 After the ceremony, butterflies were released – a unique and enchanting way to celebrate a wedding but also something that resonates with Tara. “Whenever I saw a butterfly while travelling I would think of mum as she adores them and send her a photo of it, and for our wedding she surprised us with a wonderful display of Monarch butterflies,” explained Tara. As well as giving the wedding a real homemade, homegrown feel, it was also important to Tara and Steve to get family involved in things towards their day. Steve’s brother for instance, a sign writer, made banners using blackboards – one to announce the couple’s wedding, the other detailing the day’s itinerary, which helped to personalise some of the communal areas. Steve’s mum also made beautiful picnic blankets; personalised with their names and the date of the wedding.

“We also wanted my Nan to be involved, and knowing how delicious it would be, we asked her to make the cake. It was three-tier – chocolate, lemon drizzle and fruit. Again, I wanted it to be simple and elegant, so she covered it in white icing, and used raffia ribbon and fake wild flowers to decorate it. She did an amazing job,” exclaimed Tara.

Brides also typically spend a substantial part of the budget on their dress. Tara found hers online for £100. “About three years ago, I was looking for wedding dresses, as you do, and I came across the most beautiful dress. I looked at it for ages, but I thought it was too early to buy a dress – we were engaged at that point but had not even thought about getting married yet. “Anyway, I showed my mum and she said if you like it get it. I hid it at my Nan’s house and once we set a date at Audleys Wood I confessed to Steve that I already had a dress – he took it quite well, I was worried it would freak him out,” she laughed. “My Nan did a few alterations to the dress and its length– so she ended up doing quite a lot for the wedding, bless her. 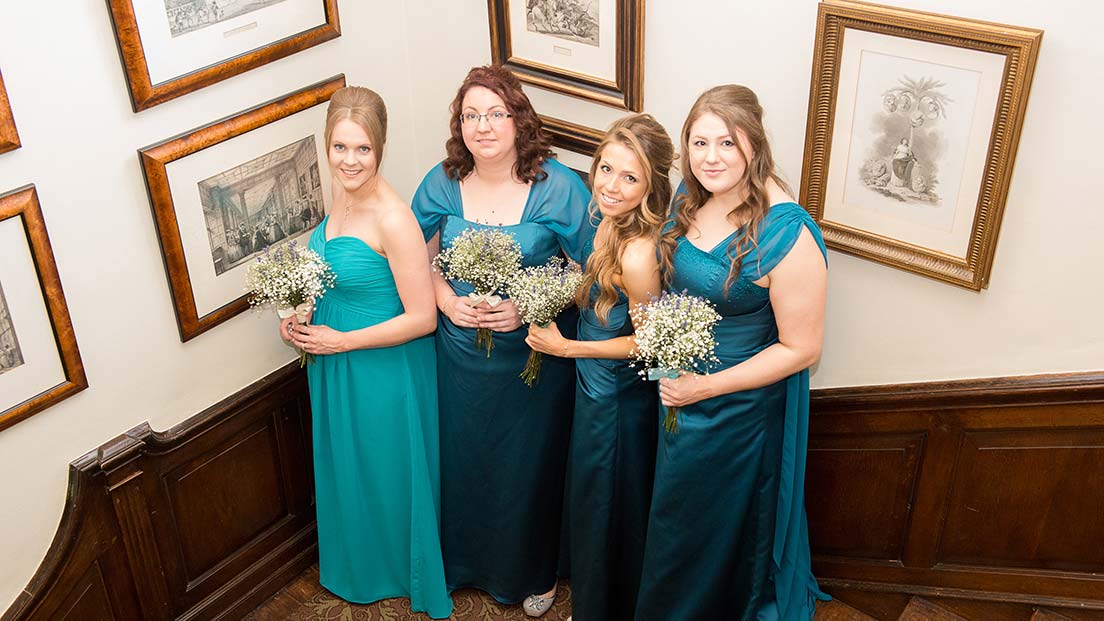 When it came to dresses for the bridesmaids I had fallen in love with the Alfred Angelo range in teal, they are so elegant and beautiful. A friend told me to look on eBay for them – low and behold, we found all of the dresses for £20 each and they looked new! I thought the colour and design would suit everyone”

As the pair wanted a small and intimate wedding and a big party, they had less than 50 guests during the day and then a further 70 evening guests. To make them feel like a part of their special day they were invited from 5.30pm, when Tara and Steve did the all-important traditions of cutting the cake and having their first dance. 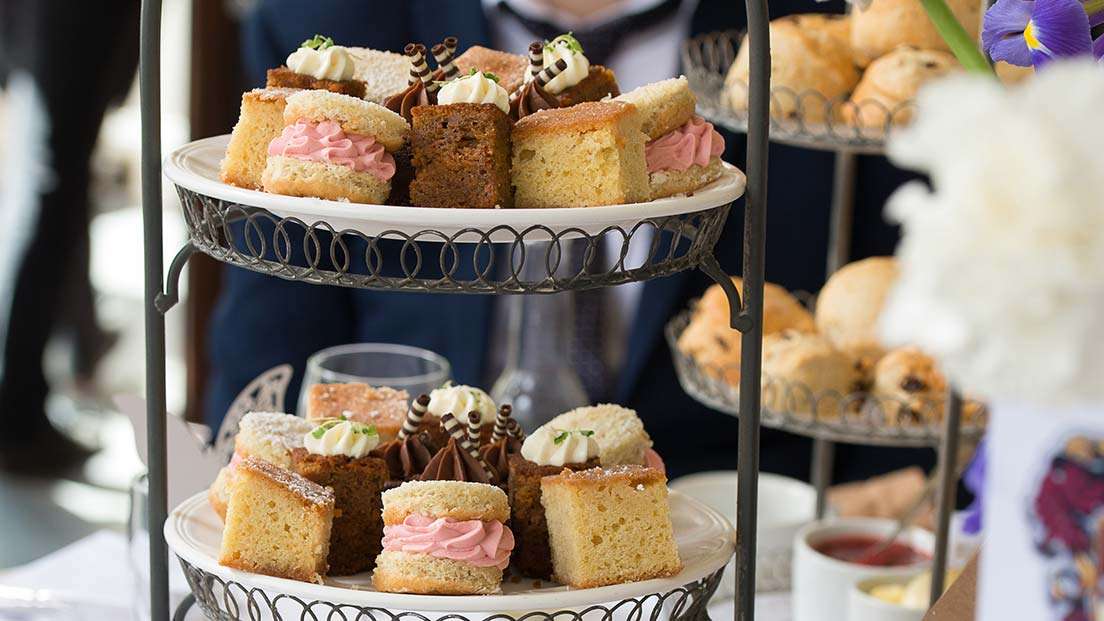 As it was a long day, after the ceremony, guests had sandwiches – Tara and Steve also hired an ice cream truck – which went down a treat with all the kids. Following photos and a break, the guests then had all of the sweet treats from an afternoon tea, including carrot cake, Victoria sponge, chocolate brownie, Eaton mess and scones with a variety of teas and coffees. The couple had a layered cheese cake as well, which was similarly demolished by everyone! At 7.30pm, there was a BBQ and then three hours later a buffet was laid out and Steve’s sweet cart that he had made for a friend’s wedding, made an appearance.

“The food was just incredible – we had a taster session with a complimentary night stay beforehand and even though we weren’t going down the traditional route of canapes and a three course wedding breakfast nothing was ever a problem. We had to keep pinching ourselves as everything was so perfect and we thought there was going to be snag but there never was. Sam Lee-Breese, the Revenue Manager and her team at Audleys Wood Hotel, were brilliant and made us feel at complete ease the whole way through our wedding journey. Even now we just love going back and we’d do it all again, exactly the same way,” explained the couple.

As Tara says, a wedding is about marrying the person you love and getting everyone involved, without breaking your bank balance.