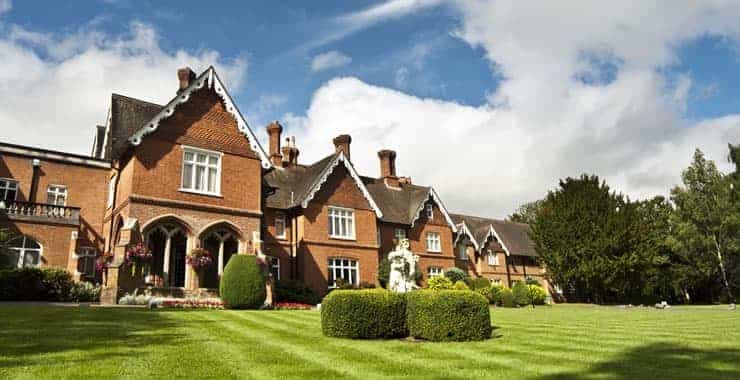 Described as a Neo Gothic Renaissance mansion, the building is known to have existed since February 5 1880, when the first occupiers were Thomas and Rachel Pain, the former being a director of the bloodstock auctioneers Messrs Tattersalls.

The name Audley is found in the Domesday Book of 1086. Then written as “Oddele”, it gradually evolved and by 1578 had changed to “Odlease”.

Thomas died in 1885 and the executors of his will sold the estate around June 1887. The new owner was William Bradshaw, a former resident of Fair Oak and later Bishopstoke, also in Hampshire. His first wife, Elizabeth Chandless, died as a result of a horse riding accident but he remarried in 1892, to Maud Hamilton Barclay of Cupar, Fife.

In 1900 Henry Adolphus Simonds, owner of the H&G Simonds brewery of Reading, purchased the estate. Childless, but determined to secure the future of his company, he invited his nephew, Louis De Luze Simonds, to take up a position within the company. The son of Frederick Simonds and Sophie De Luze, descended from the noble De Luze family, Louis ensured the survival of the Simonds brewery using his family ties to the wine merchants of Bordeaux.

During the Second World War the Simonds family relocated to Mortimer. They leased Audleys Wood to Viscount Camrose, the editor and proprietor of The Daily Telegraph, whose Hackwood estate became a military hospital, which was later named the Basingstoke Neurological and Plastic Surgery Hospital.

In commemoration of the many great statesmen and journalists who met with Viscount Camrose at Audleys Wood, there is always a current copy of The Daily Telegraph in the lounge.

In the autumn of 1945 both families returned to their respective homes, but after six years Eric Simonds sold the estate. Viscount Camrose bought Pensdell Farm and the surrounding woodlands while the house and gardens were sold to the county council, who ran Audleys Wood as a home for the elderly and a workshop for the disabled. And so it continued for 35 years until its splendid, most sensitive conversion to Audleys Wood Hotel in 1989.