There is something really quite magical about a winter wedding – we meet newlyweds Cameron Cranwell and Anne-Sophie Tyson who made the most of this great season for their special day at Chilston Park Hotel.

“There were a couple of reasons why we opted for a December wedding,” Cameron tells us. “Anne-Sophie really likes Christmas decorations, well we both do actually, but also we have a lot of family abroad – my parents are in Toronto, I have two uncles in the States and one in Indonesia, and Anne-Sophie has family in France – and this is a time of year when everyone is most available.” 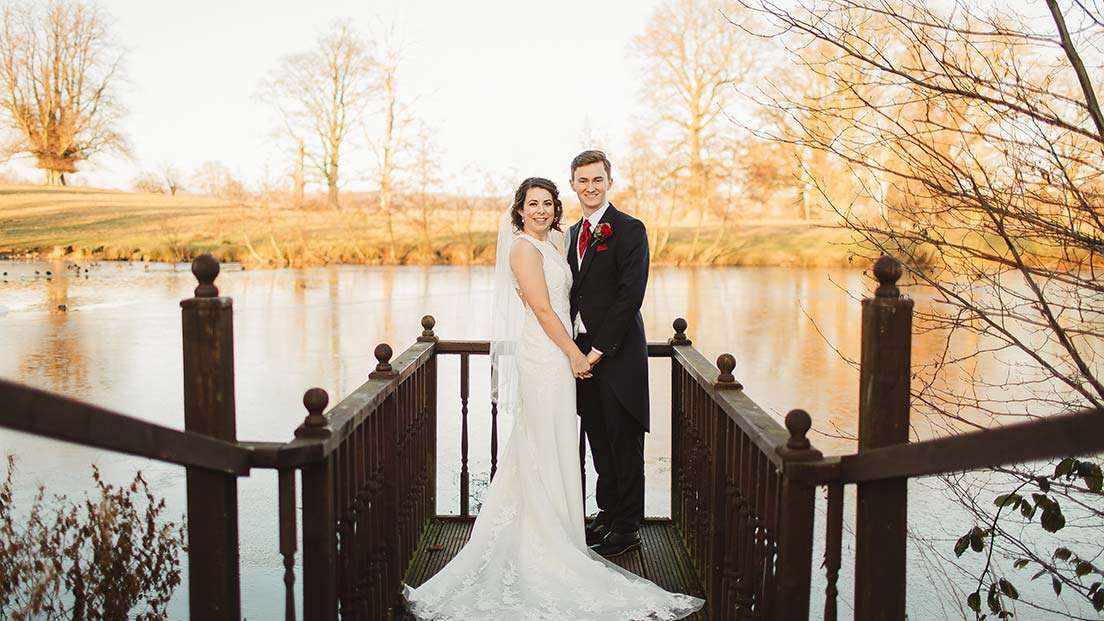 “Also with a summer wedding, you can never guarantee that the weather will be nice anyway, at least with a winter wedding you can be all cosy inside if it’s raining or really nasty outside. Chilston Park is such a lovely venue indoors and out, so it worked really well for us. We were hoping for the best but preparing for the worst, as it happened it was a crisp, clear perfect winter’s day,” adds Anne-Sophie. 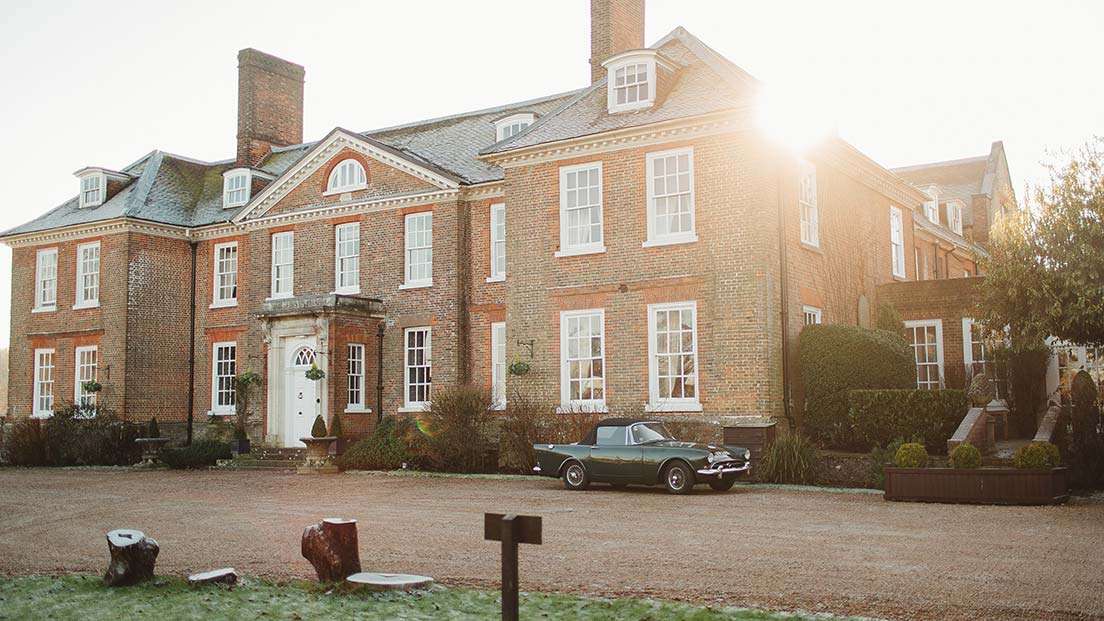 While it was by complete coincidence, the couple first viewed Chilston Park in Lenham, Kent, exactly a year before their wedding (December 29, 2016). Already dressed in Christmas décor it made it easier for them to picture how their big day might look, especially given the colours matched what Anne-Sophie had in mind: burgundy and silver. “I could visualise the entire day there, unlike anywhere else we looked at, and that made the decision for me,” recalls Cameron.

The location was also ideal, being Anne-Sophie’s home county both of her parents still live in Kent (just 45 minutes from the Georgian mansion), while Cameron has family that live in what is often referred to as the Garden of England, too, as well as neighbouring Surrey. It was also easy for them and so many of their friends to get to from where they live in Marylebone, London, not to mention it is just 50 minutes from Gatwick airport – perfect for those guests coming from abroad. 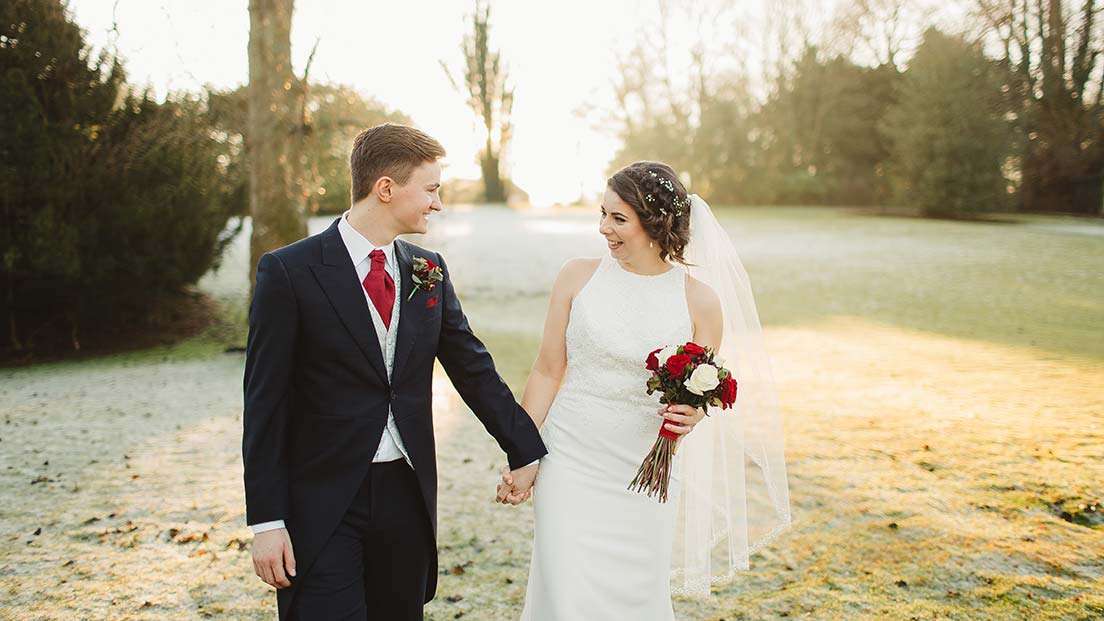 Having already done a lot of research online and looked at a handful of other places, some of which were a lot more expensive, Anne-Sophie conceded that it was in fact perfect for hosting their ceremony, wedding breakfast and reception, no doubt helped by the rather attractively priced Twixmas package. “It gave us sole use of the hotel, which was really important to us,” reveals Anne-Sophie. “It also meant we could book out the rooms for friends and family, and it was so lovely to have them all at breakfast the next day talking about everything that had happened at our wedding.”

The package chosen was based on 75 day guests plus an additional 45 evening guests, but, of course, Chilston Park can accommodate more people, and the couple had a party of 95 for their ceremony and wedding breakfast, while a further 35 guests were invited to the reception. “With sole use of the Manor House and grounds I was concerned that people would spread out too much and that it would feel sparse and cold, but it worked really well – the atmosphere was great and it meant people could take advantage of some of the quieter areas away from the music,” says Anne-Sophie. 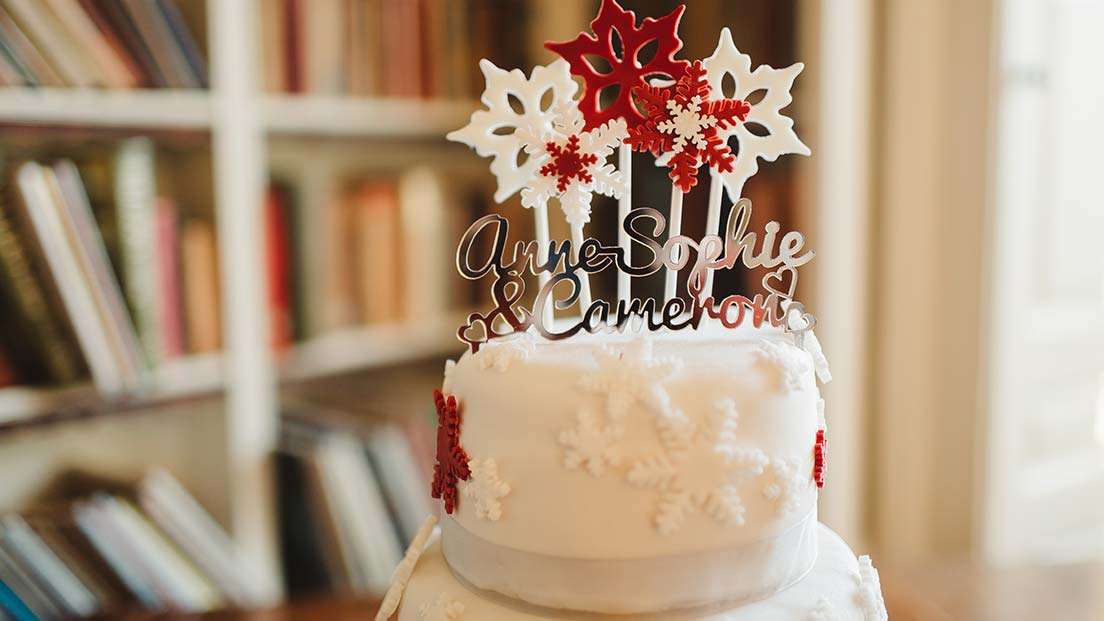 When it came to a theme, they wanted to make a point of it not being specifically Christmas, and as mentioned Anne-Sophie had already decided on her two colours, which contrasted perfectly with the green of the foliage at the hotel from the Christmas trees to the holly and ivy. “The maid of honour’s dress was burgundy, as was the organza ribbon that we used to dress the aisle, the seats and favour bags. The centre pieces were glass fish bowls with red or silver stones and then a candle in the opposing colour. The groom’s party wore a silver waistcoat and silver cravat, except for Cameron who wore burgundy. My bouquet contained white and burgundy roses and berries, and Cameron wore a burgundy flower in his button hole while everyone else had white.  We wanted to keep it simple and elegant,” says Anne-Sophie. 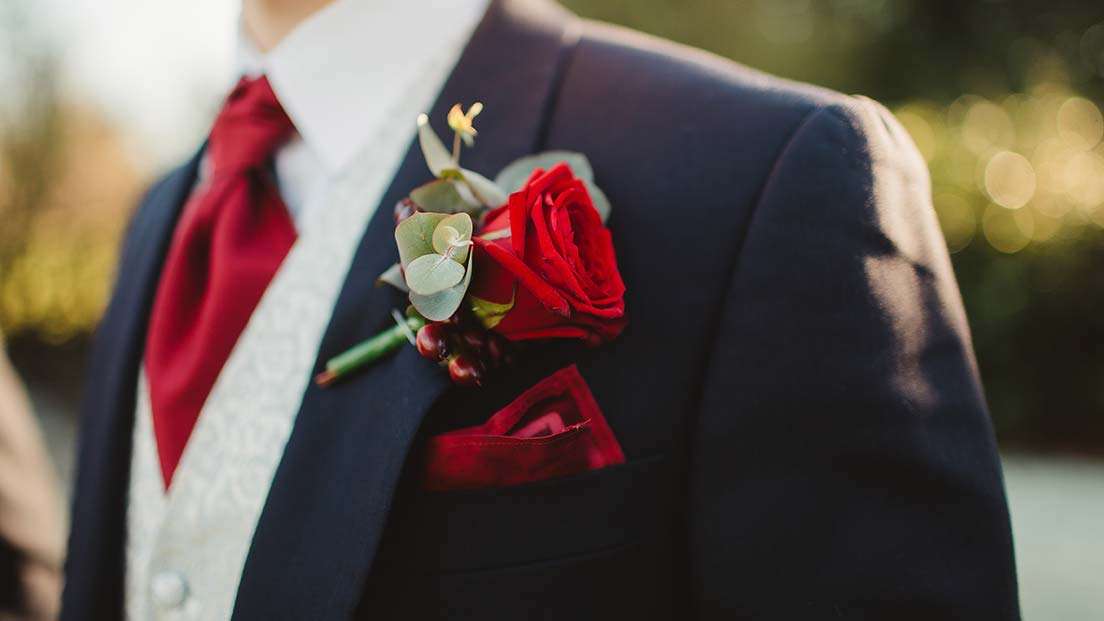 In the months leading up to their wedding, Cameron and Anne-Sophie visited the venue several times – one of the more memorable occasions was when they trialled their menu choices. The package allowed them to choose three canapés from a selection of ten, together with the same number of starters, mains and desserts from a range of five for their wedding breakfast. “We made sure there was a vegetarian and pescatarian option so that everyone was catered for. It also allowed us to have a reception drink for each guest, half a bottle of recommended wine and a glass of Champagne for the toast,” Anne-Sophie tells us.

“Not all of the wine was drunk at the meal so the venue’s Conference and Banqueting Manager, Sam, put the unfinished bottles by the bar during the reception, which we thought was a really nice touch. As well as being very pleased with the service and food we were impressed with him – he was really proactive in terms of doing things without us needing to ask him. When things overrun for example, he would make sure everything still went to plan without impacting the overall feel of the day and being invasive.” 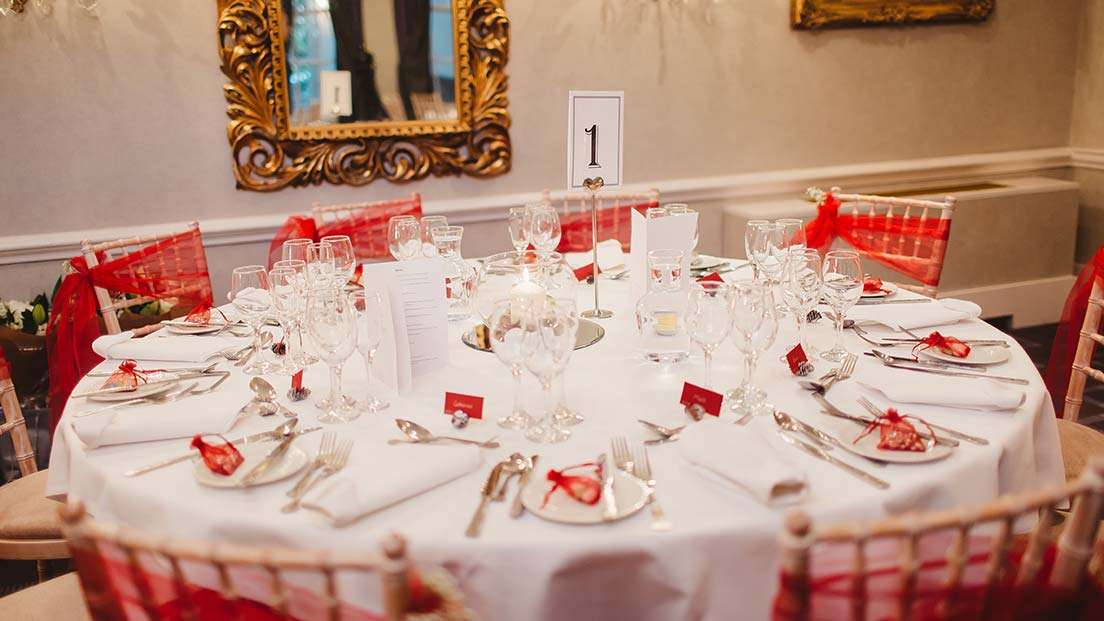 In addition to their package, the pair opted to open up their evening with a champagne bar. “There was a 30 minute gap between the meal and the reception, which allowed all of our guests to check in and freshen up, and we thought this would be a great way of encouraging them to come back again,” explains Cameron. Not that they needed much persuasion with an evening buffet, a live band playing hits from the sixties through to today, as well as a photo booth, that was cleverly crafted from an Instagram selfie frame, lots of party props and a couple of Polaroid cameras – a present from Cameron’s sister.

So what was the best part of the day? For Anne-Sophie it was the ceremony: “In all of the pictures everyone is laughing. When we were planning it I had in the back of my mind that the reception is normally the best part of a wedding. Obviously the ceremony is a lot more special when it is your own day, but we could never have predicted how much laughter and fun it was.” Cameron agrees. “I enjoyed the whole day, but for me the most memorable part was Anne-Sophie walking up the aisle as I was trying so hard to hold back the tears.” 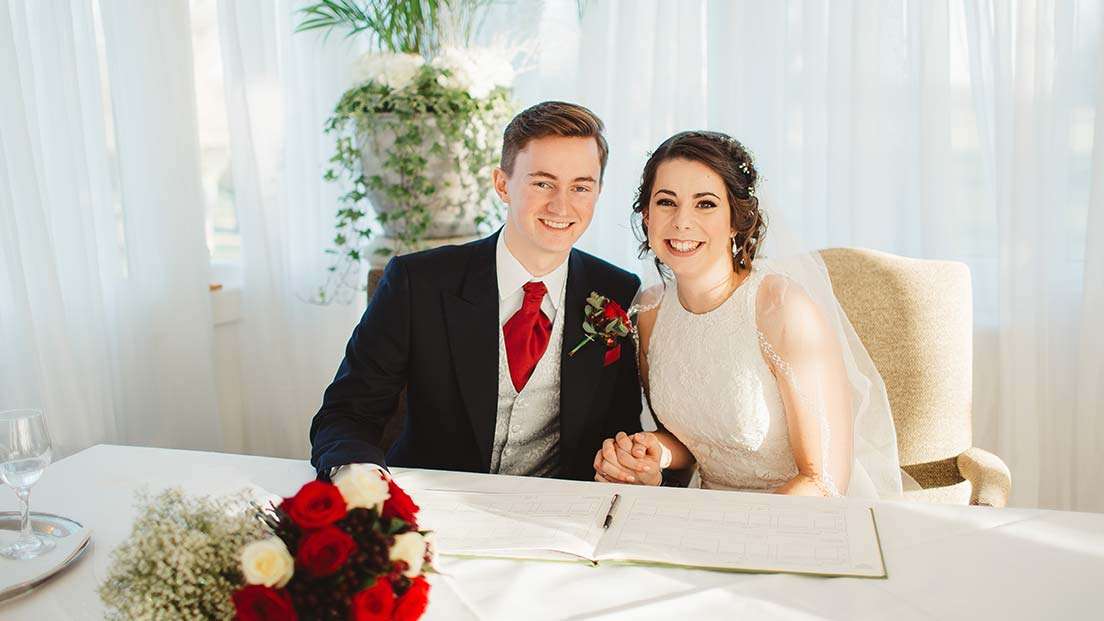 And their favourite thing about the venue? “There’s a beautiful dark oak, big grand staircase that branches out in two directions as you reach the top and above it is a skylight that floods the space with a beautiful natural light,” recalls Cameron.
“I really love the grounds, with the clear blue skies, frosted grass and frozen lake it just looks stunning. The outside of the house is beautiful, too. And then there are the open fireplaces. I think in answer to your question – it was everything!” confesses Anne-Sophie. 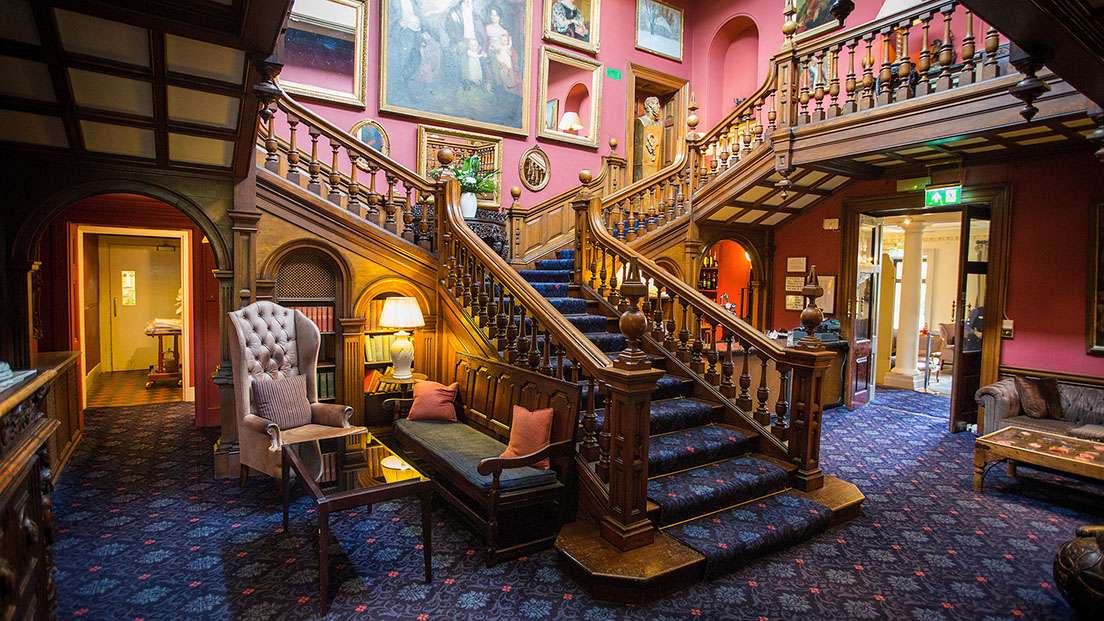