The Art of Creating the Perfect Wedding

As a self-confessed perfectionist Clara Pirie-Wood wanted to plan and execute the best wedding ever, here is how she made her big day at Buxted Park Hotel stand out.

Clara Pirie-Wood is an experienced Hospitality Manager of a health and wellbeing centre, which means that it is her responsibility to lead a team of domestic and catering assistants and ensure the whole building – from the tearoom, restaurant, guesthouse and patient rooms – is appropriately staffed. So, while Clara is better versed in the event management industry than others are, giving her the upper hand when it came to planning her wedding, she has, by her own admission, extraordinarily high standards. Fortunately, Buxted Park Hotel surpassed her expectations and then some when it came to her big day on the spring bank holiday. 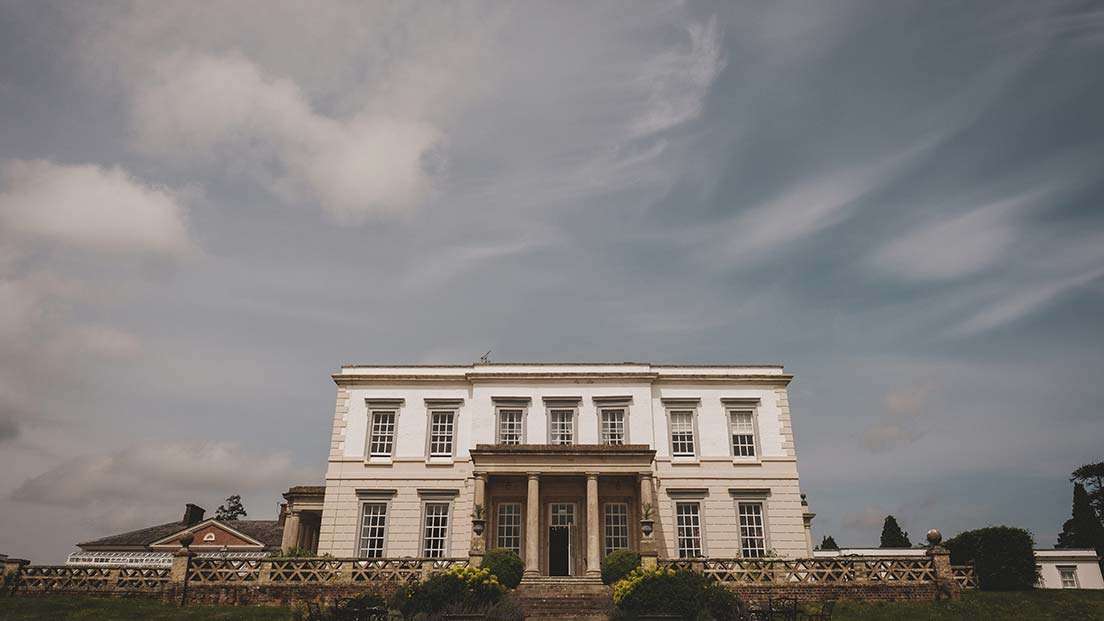 Buxted Park was always high up on Clara (30) and husband William’s (34) list of venues to consider, although having already attended a handful of weddings there they were tempted to find somewhere different. “We always wanted a hotel as we have elderly and unwell family, so we needed somewhere for them to go if they needed a break and somewhere to rest. We looked at loads of venues in the area, but we kept coming back to Buxted Park as it ticked all the boxes and we realised we were cutting off our nose to spite our face. “My family are so important to me and I knew that they would be looked after really well at Buxted Park, which meant I could totally relax. We also loved how the staff go out of their way to welcome you, as soon as you walk through the door, you feel like you are at home. We did not hire it exclusively but that did not bother us – I am not going to be a bride again I want everyone to see me,” she laughed before adding. “In all seriousness had it been any other venue we would have hired it exclusively, but all of the rooms flowed together so well – with a lounge and a bar at the heart of them – and once the doors were shut you did not notice any of the other guests in the hotel anyway. 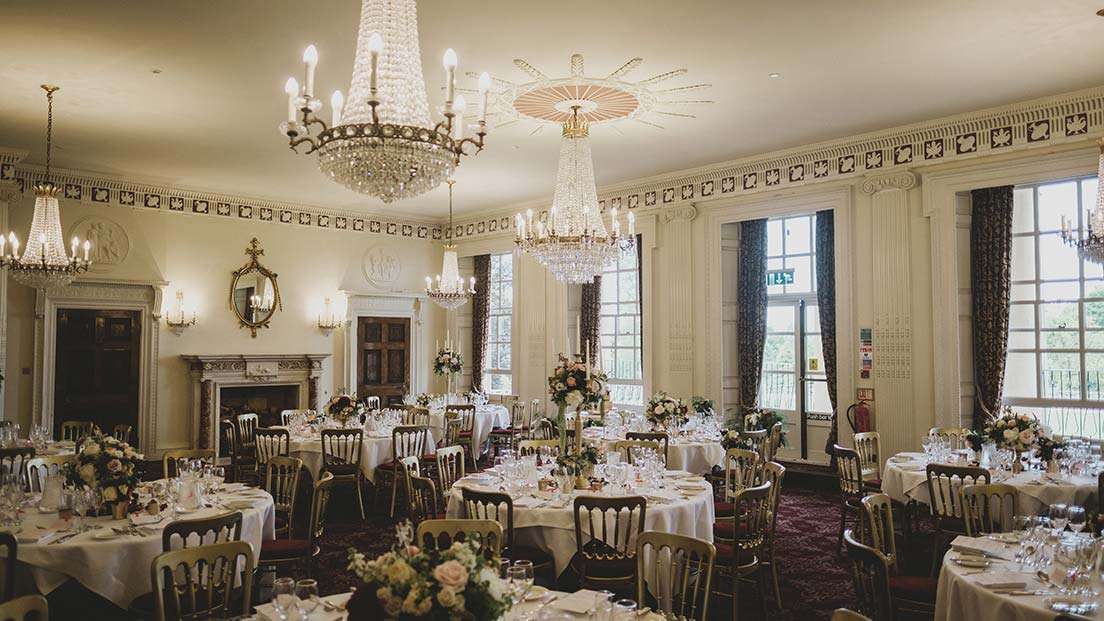 “I also wanted to make a weekend of it, and they were very helpful in accommodating us,” added Clara. On the eve of the wedding (28 May), William and his wedding party met Clara and her bridesmaids, matron of honour and close family members for drinks and a brief run through of proceedings the next day before leaving them all to have dinner together. Then on the third day, which also coincided with the birthday of Clara’s brother, both families all had breakfast together.  The other overriding factor in opting for Buxted Park was that it was just 20 minutes from their home in Crowborough, East Sussex, and the décor perfectly fitted with their theme. As William proposed to Clara in New York, they decided to go with American chic and black tie, and again, by complete coincidence their chosen colours – burgundy, gold and blush pink – were already in the furnishings. 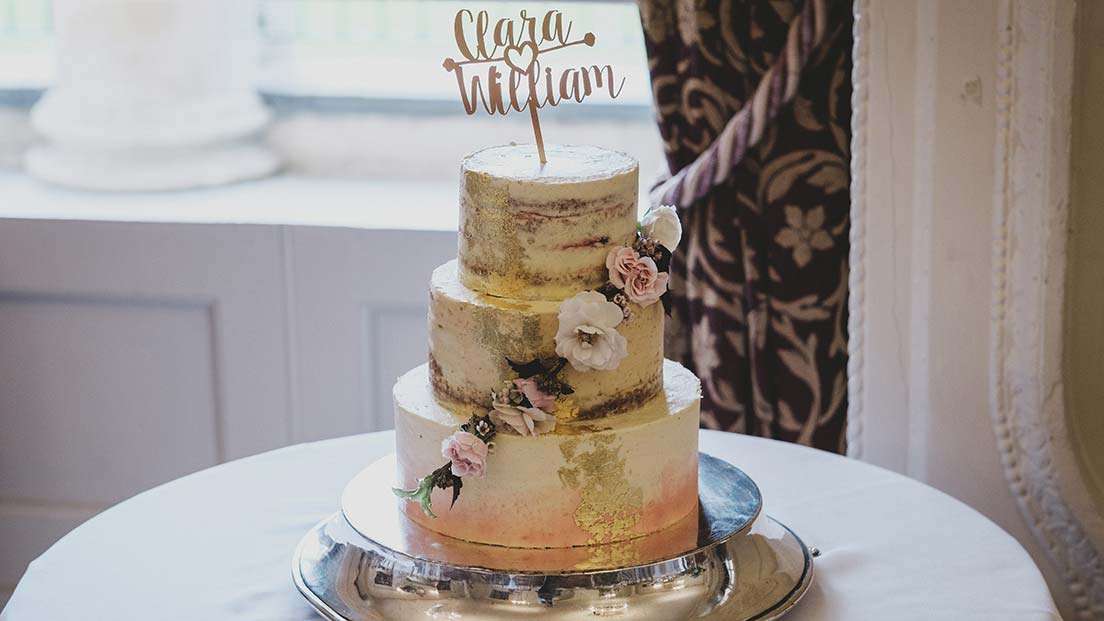 Being a self-confessed perfectionist – it is all in the details for Clara – even down to the favours. “I love chocolate so we decided to go for Kent-based chocolatiers Stas to make truffles for our favours, which were boxed and finished with blush pink bows. Even the base tier of our wedding cake was a Belgian couverture chocolate sponge. The middle tier was a salted caramel sponge and the last tier a Madagascan vanilla sponge. It was then all iced in pale ivory and blush pink buttercream, which graduated up to ivory with a semi-naked finish, and dressed in a gold edible leaf trail and a beautiful floral arrangement from Blooming Perfect,” explained Clara. “The florist similarly got my vision straightaway and was a real pleasure to work with.” The couple also colour matched the hand written menus, chairs, décor (blossom trees and red carpet) and flowers, which included lots of foliage as well as roses and berries. 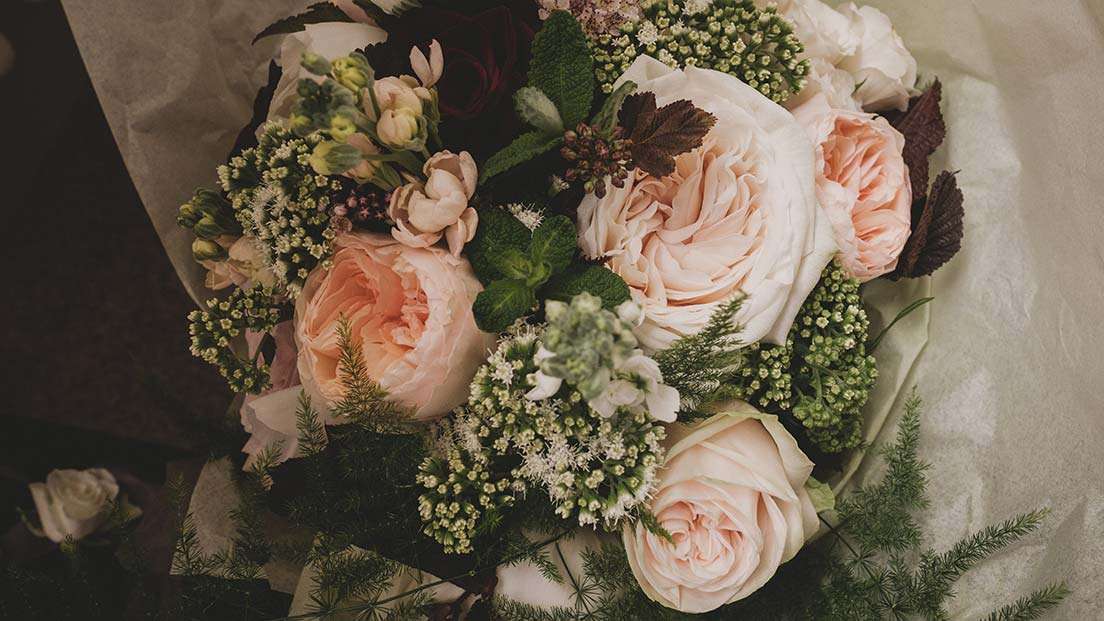 The bridesmaids wore gold and mink dresses that bore similarities to Clara’s own dress, while the men all wore black DJs, apart from the groom who wore a burgundy bow tie. “I always said I would never go for a strapless plain dress, but I did exactly that! It was a Sassi Holford gown but I worked with the designer and the team at Pantilles Bride to have a bespoke element made. It had a full-length skirt rather than being short at the front with tailored three-quarter length beaded top and satin belt, which I designed – I even chose the fabric. For the evening, they both came off and I wore a narrow sparkly belt with earrings and a hairpiece to match. This meant I could have an entirely different look and create the wow factor I was after.” 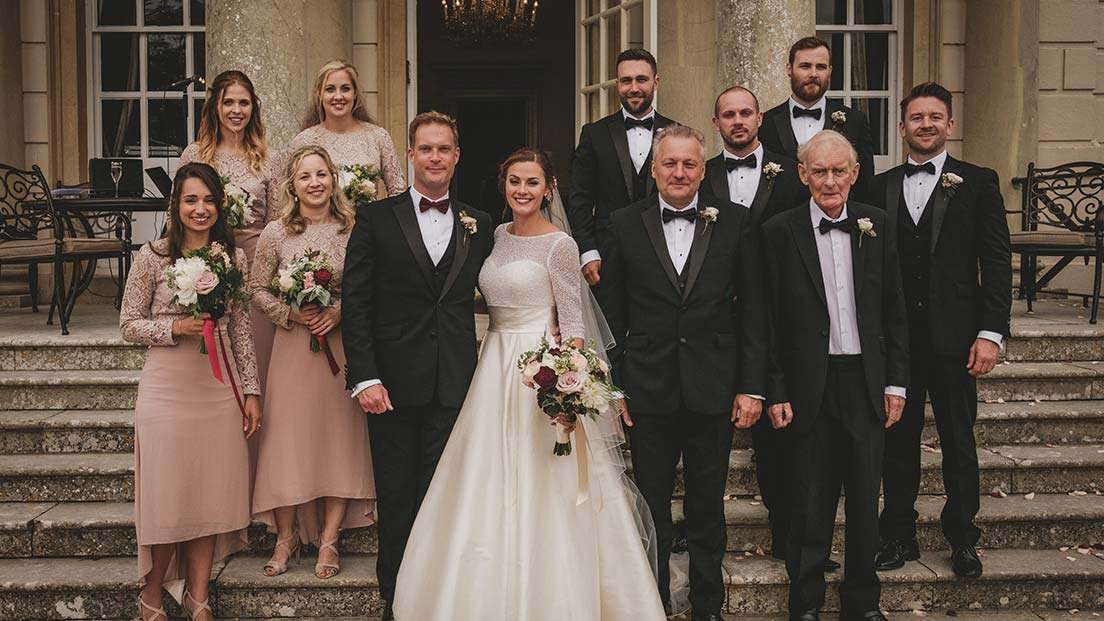 A large part of Clara’s job involves sampling and designing menus for residents and guests, not to mention her and William are real foodies, so when it came to the wedding breakfast the team of chefs at Buxted Park had to go above and beyond. “I can be quite fussy – our poor wedding coordinator, I think she hated me by the end – but everyone at the hotel was brilliant. We chose a couple of options for both starter, main and dessert and then tried them all out. We were given a pen and a piece of paper to write down any changes and requests, and the chef was so obliging.  “In the end, we had three clear winners: ham hock terrine, lamb and chocolate and raspberry tart. Choosing food for 80 people is quite intimidating and we were worried that not everyone would like the menu, but the entire day, including the food, was a reflection of us as a couple so we opted for what we would want to eat. Fortunately it was all lovely and everyone raved about how good the food was,” said Clara. 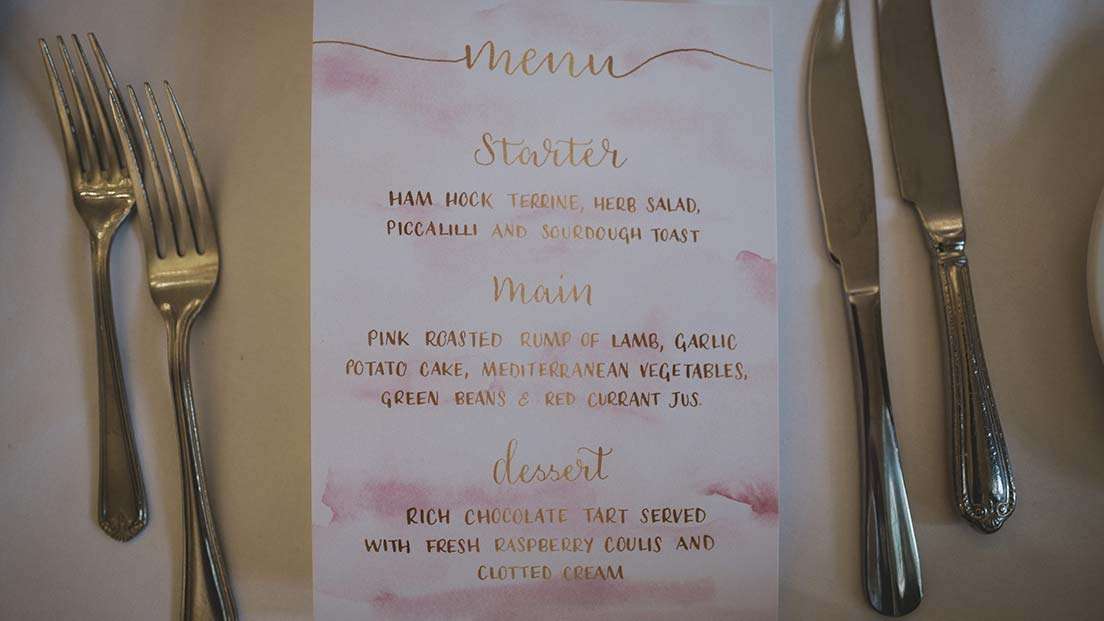 Sadly, the only thing that did not go to plan was the outdoor ceremony. “We had arranged to get married on the steps leading down to the formal lawns, but an hour beforehand it started to rain so the team had to bring everything in and set it all up again in the Orangery. I was gutted, and in the end it did not rain come the time of our ceremony, but I have to say looking back now it was probably for the best. Being inside everyone could hear the vows and readings so much better.  The Orangery is an original part of the Georgian building and despite it being a quite gloomy day the entire room was bathed in daylight and it looked so beautiful.” 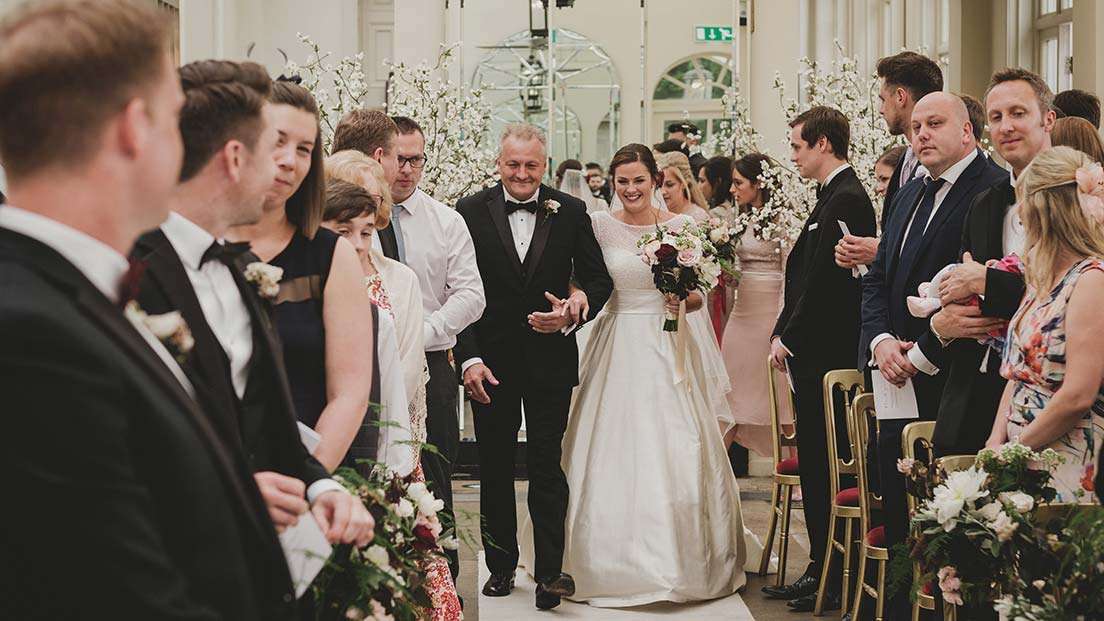 Afterwards they had their reception drinks on the terrace outside overlooking the beautiful parkland with Tom Fitzpatrick, a jazz singer, providing the perfect background music. They then made use of the ballroom for the wedding breakfast: the Empire Chandeliers, Georgian sash windows and ornate fireplaces giving a real sense of grandeur and fitting in with their black tie theme perfectly.  While the jazz singer got everyone into a relaxed Sunday feel good vibe, the band, The Salvation, was perfect for the evening. Not only were the band professional and all fantastic musicians, but they got the whole party going and everyone dancing, which was rather lucky, as they were a blind pick based on online reviews and YouTube videos. For those that did not want to get on the dancefloor the couple hired an Odyssey selfie mirror, which was brilliant fun and fitted in with theme perfectly with their gold balustrades and red carpet. The evening closed with fireworks from Arora, another one of Hand Picked Hotel’s suppliers (together with the videographer Cut Above Productions) – it was a wedding present from William and a surprise for all of their guests. It perfectly brought the day to a spectacular end. 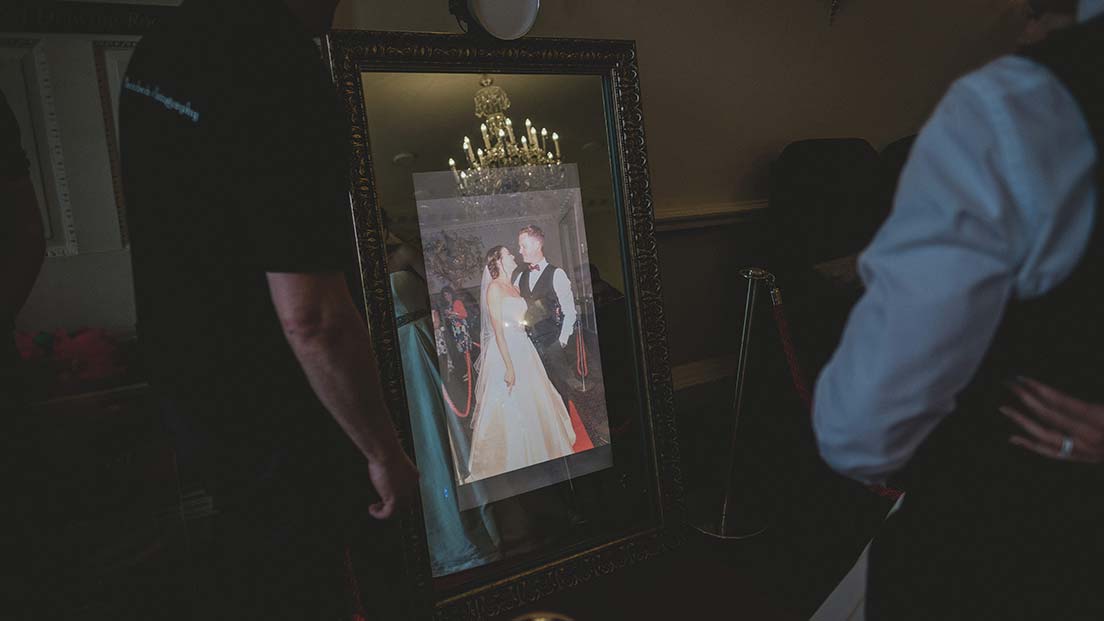 It was not their favourite part of the day however – it was seeing all of their friends and family in one place that made it unforgettable for the pair. “It was incredibly humbling and emotional to have them all there to celebrate with us,” said Clara before adding. “Mark, the Functions Manager, who also acted as toastmaster, was outstanding and made the day for everyone – he oversaw everything and working tirelessly to ensure we had the most memorable day. He was constantly at our side to help and assist while coordinating the rest of the team. “In fact, they were all brilliant, from beginning to end. Our wedding was the fourth one of the weekend so I was worried they would all be exhausted but that was not the case at all. They could not have been more attentive, professional and hardworking. No detail was overlooked and everything looked perfect. 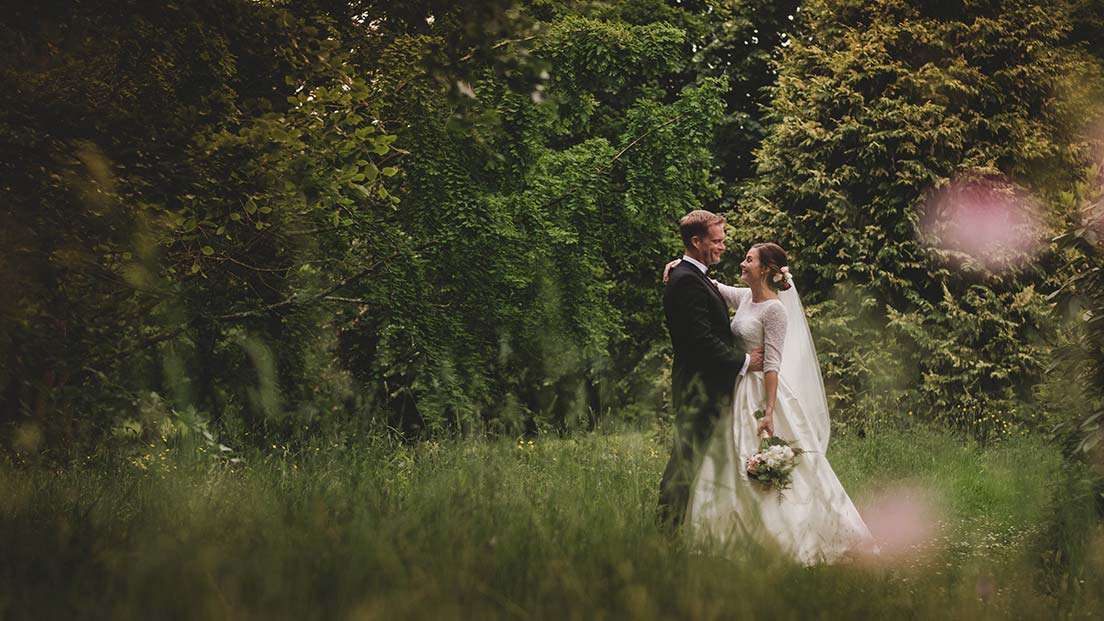 Simply put our day was everything we had dreamed it would be, we loved every second from the rehearsal dinner the night before to the breakfast the following morning as a married couple: it was a day never to forget.”