Hand Picked Hotels Launch Royal Package to Coincide with Launch of The Crown: Season One on Blu-ray™ and DVD 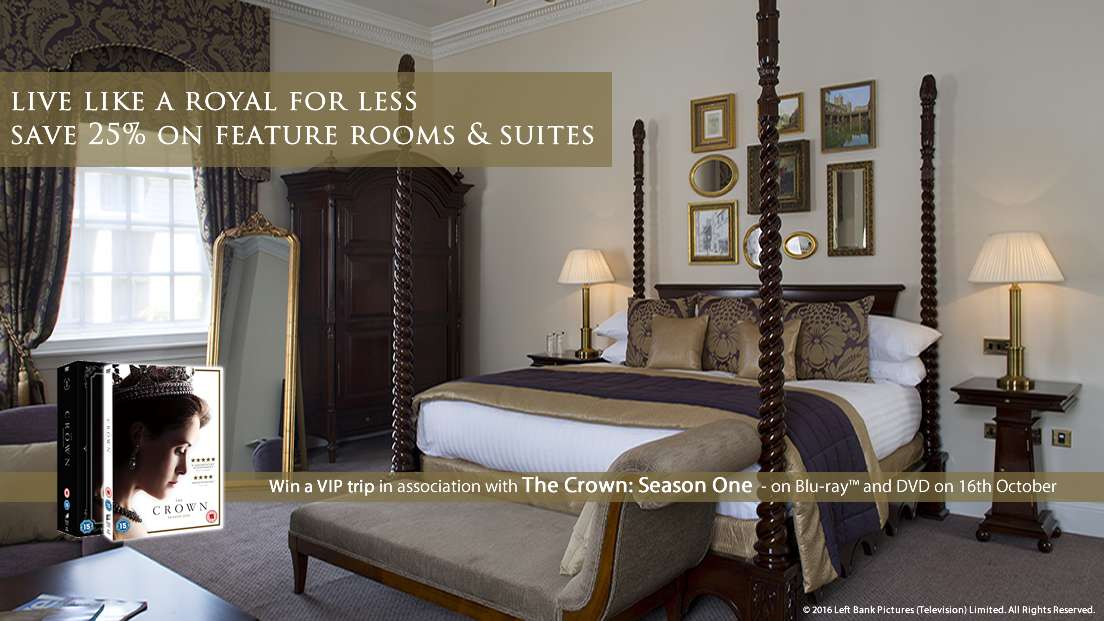 Historic country house hotel group, Hand Picked Hotels, is celebrating their hotels’ fascinating connections with royalty this October with the launch of a royal package to coincide with The Crown: Season One on Blu-ray™ and DVD out on the 16th October.

The campaign offers guests the opportunity to live like royalty for less this autumn with 25% off their historic Feature Rooms and Suites which include striking features such as huge sleigh beds, dramatic four poster beds or ceramic roll top baths - all individually designed in sumptuous surroundings fit for a king or queen.

The Crown package also includes a sparkling royal afternoon tea for two with Kir Royale cocktail, £30 towards dinner in their award-winning restaurants, traditional breakfast the following morning and automatic entry into an exclusive royal-themed day out in London with access to the Crown Jewels in The Tower of London, dinner in a top London restaurant and a show at The Theatre Royal, all courtesy of Hand Picked Hotels and The Crown.

Hand Picked Hotels’ historic country house portfolio spans the length and breadth of the UK and the Channel Islands, with many having intriguing links with the royal family dating back centuries.  Fawsley Hall in Northamptonshire was a royal manor as early as the seventh century and Queen Elizabeth I stayed in the south wing as far back as 1575.  At Bailbrook House in Bath, Queen Charlotte - wife of King George III - first visited the hotel in 1817 accompanied by her son the Duke of Clarence (later King William IV) and at Woolands Park Hotel in Surrey, King Edward VII (before he was King) was a regular visitor. More recently at Crathorne Hall Hotel in North Yorkshire, Prince Charles and the late Queen Mother, Elizabeth, both stayed at the hotel, and in 2005, HRH Queen Elizabeth II visited the Grand Jersey Hotel in The Channel Islands for a civil lunch to commemorate the 60th anniversary of the liberation of the island.

The popular hit series, The Crown, focuses on Queen Elizabeth II as a 25-year-old newlywed faced with the daunting prospect of leading the world's most famous monarchy while forging a relationship with legendary Prime Minister, Sir Winston Churchill. The British Empire is in decline, the political world is in disarray, and a young woman takes the throne....a new era is dawning. Peter Morgan's masterfully researched scripts reveal the Queen's private journey behind the public facade with daring frankness. Prepare to be welcomed into the coveted world of power and privilege and behind locked doors in Westminster and Buckingham Palace....the leaders of an empire await.

The Crown package is available at Hand Picked Hotels for a limited time only and must be booked by 27 October 2017 for stays between 16 October and 23 December 2017.  Please quote PCROWN17 at the time of booking. Full terms and conditions online www.handpickedhotels.co.uk/THECROWN

The award-winning collection is renowned for exquisite food, fine wines and bespoke service by Hand Picked people in stylish, relaxing surroundings. There are a total of 17 classically British hotels in beautiful settings across England and Scotland and 3 Channel Island retreats, with locations ranging from the New Forest and Jersey to Yorkshire and Edinburgh.

Hand Picked Hotels has won an impressive number of awards, with 15 hotels awarded two AA rosette status and Grand Jersey holding three rosettes. Ten hotels have achieved red star status which means they stand out as the very best in the British Isles. There are also ten hotels with spas offering the latest therapies and treatments to promote wellbeing and relaxation.