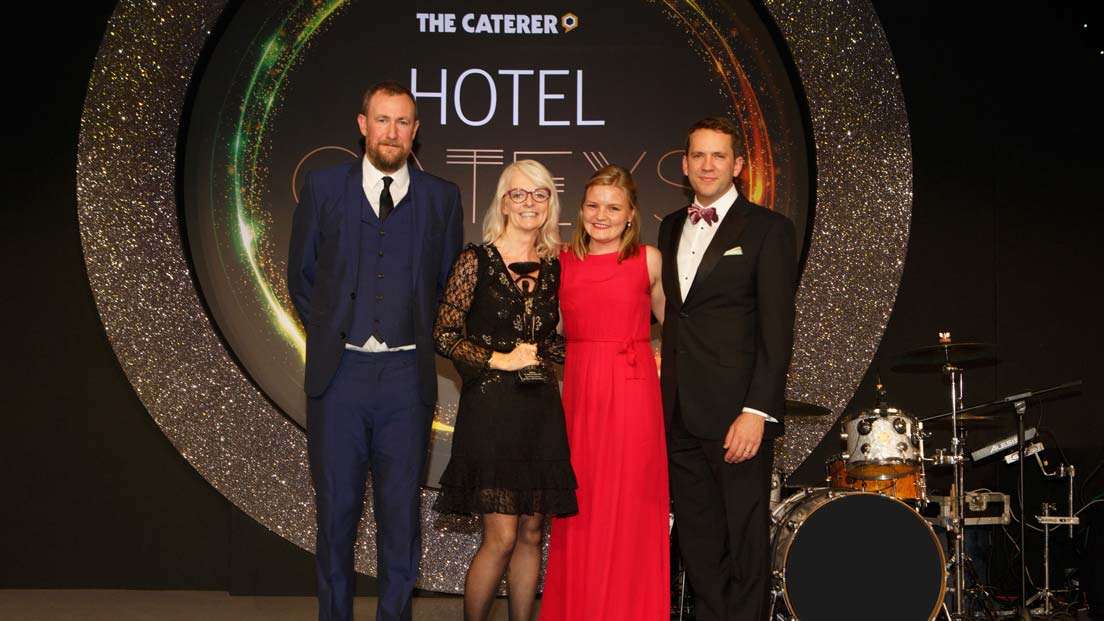 We are delighted that our very own Group Health Club & Spas Manager, Lesley Bacon, has won Spa Professional of the Year at the 2018 Hotel Cateys.

Run by The Caterer magazine and now in its 12th year, the Hotel Cateys represent an independent benchmark of operational excellence across a variety of roles and departments within the hotel industry, including front of house, food and beverage, conference and banqueting, concierge, revenue and spa.

Recognised for her steadfast commitment to achieving sales and revenue goals whilst promoting an energetic and fun environment to work in, Lesley was praised by the awards judges, with Nicki Kurran from the Spa Consultancy commenting, “Lesley is a strong, highly experienced manager with fantastic commercial acumen and long term development plans”  for the business.

During the nomination process, Noella Gabriel, President of elemis, contributed:  “Lesley is a formidable force and one of the best in the business. She is always ahead of the spa market and her initiative delivers every time.  As a fellow woman business leader, we share the same values; integrity, determination and drive.”

Lesley was delighted with her award and the growing recognition of spas and health clubs within the wider hotel sector, commenting: “I am thrilled to have won this award and be celebrating with a host of industry professionals who all deserve acknowledgment here tonight.  This award is testament to the hard work and commitment shown by the entire health club and spa team across Hand Picked Hotels and in particular, our department project manager, Helen Wynne, who has worked with me for a number of years to achieve multiple milestones that we’re all really proud of.”

Lesley has worked with Hand Picked Hotels for 12 years during which time she has managed several renovation projects and launches, the most recent being the opening of the spa and health club at St Pierre Park in Guernsey. Working closely with group’s asset and design teams, Lesley oversaw the extensive £5m redevelopment project from design to operations and pre-opening sales, before opening officially in 2016.

St Pierre’s spa is one of the largest on the island and since reopening it has won countless awards including the Good Spa Guide’s Best Spa in The Channel Islands 2018 for the third year in a row for its impressive design, range of facilities and customer service excellence.

All ten sites have been awarded or retained either 4 or 5 ‘Bubbles’ from the Good Spa Guide and there have been additional recognition awards during the last financial year.  The spa and health club at Rookery Hall in Cheshire was a finalist at the National Fitness Awards for health club of the year and a finalist in the residential spa of the year category in the National Spa Awards 2016/2017.

Norton House in Edinburgh was runner up in the National Fitness Awards for best hotel facility and was a finalist at the Good Spa Awards for customer service.  In addition, L’Horizon Beach Hotel & Spa in Jersey won the 2016 best spa hotel for families at the Jersey Style Awards in 2017 and has been a finalist in the Good Spa Awards for Best Spa in the Channel Islands for two years running – beaten by our own St Pierre Park!

At the Hotel Cateys, Lesley beat off stiff competition from spa professionals at Dormy House, Pennyhill Park and The Midland, Manchester to scoop the prestigious accolade at the glittering awards ceremony in London on 23rd November.