Ever wondered where our steaks and sausages come from? Donald Russell our meat supplier shares with us their history and recipes and an exclusive special offer for readers! 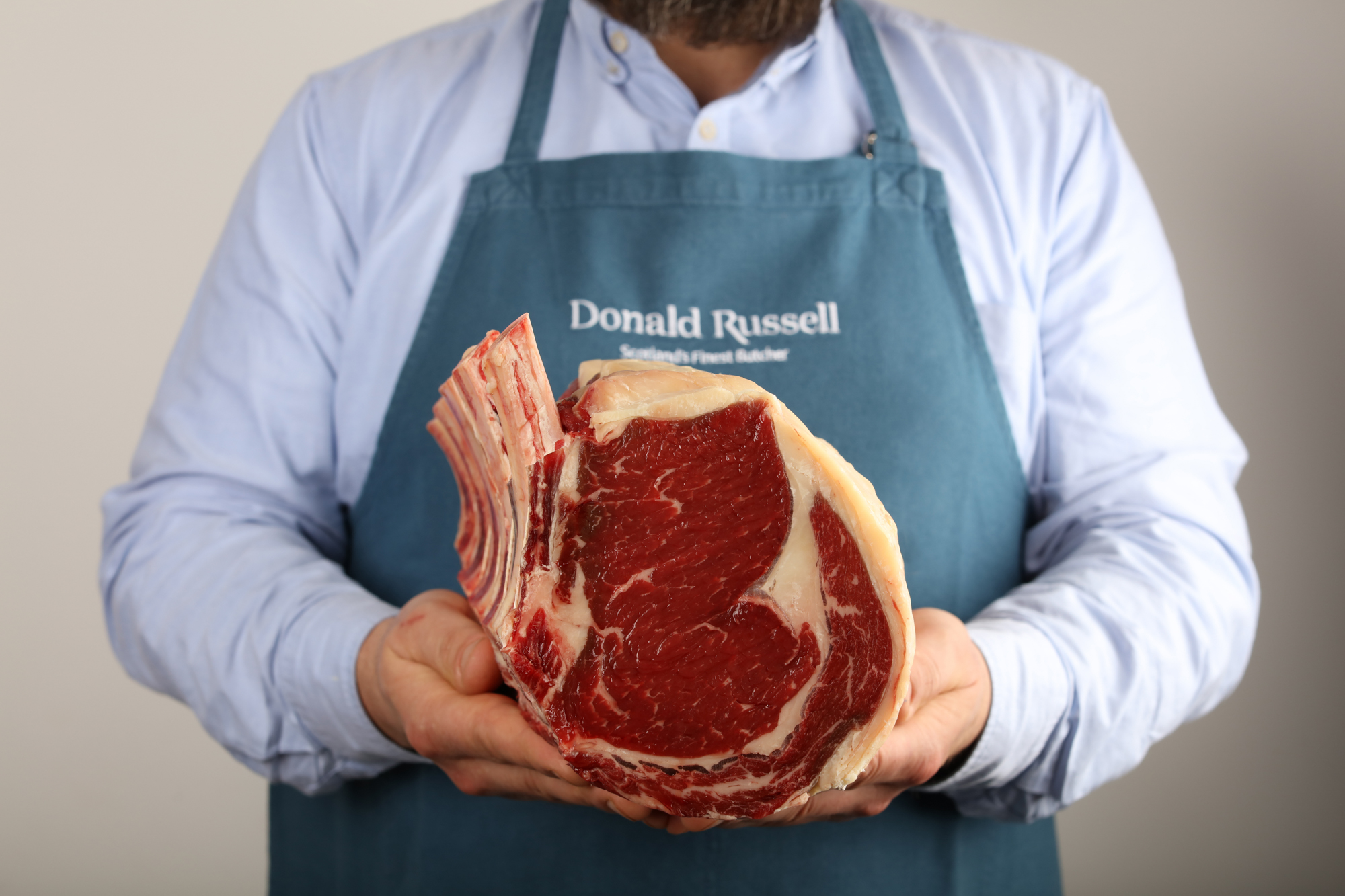 Donald Russell is a traditional Scottish butcher, from Inverurie in Aberdeenshire, established for over 40 years.  The business started life exporting premium beef and lamb to exclusive restaurants around the world, and have expanded both their product range and customer base, as they now deliver to homes in the UK and beyond. In fact, they’re the UK’s most popular online and mail order butcher!

They hold a Royal Warrant, which means they supply Her Majesty the Queen and Her Royal Households. They’ve held this continuously for over 35 years now – no mean feat, as the standards for maintaining a Royal Warrant are exceptionally high. 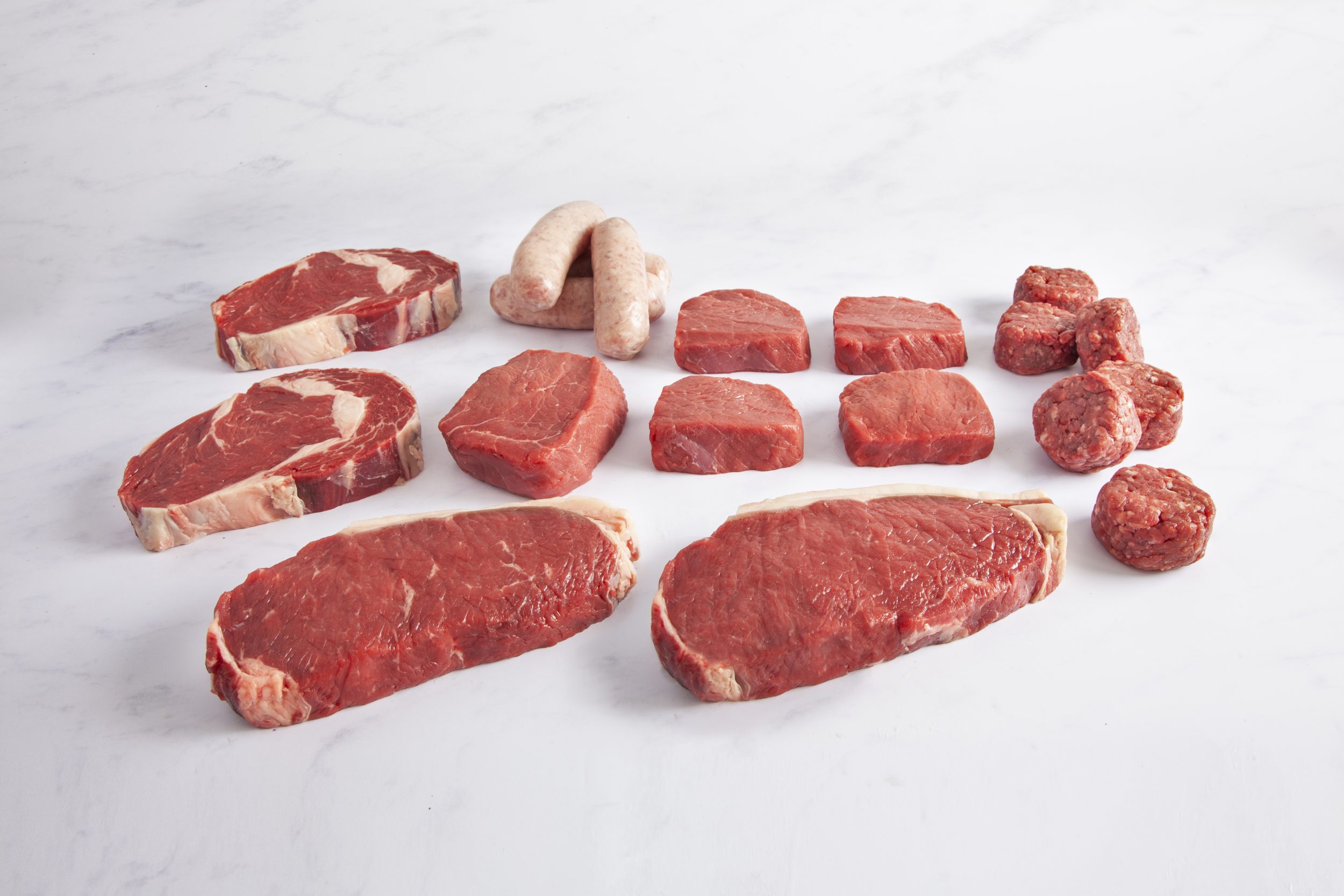 Tuck into this Rare offer from Donald Russell

Now you can enjoy the same premium steaks, sausages and more that you'll find in our exclusive restaurants, in the comfort of your own home. Here’s a special introductory offer from Donald Russell, which will let you try them out for half price.

Get your half price Traditional Steak Selection here 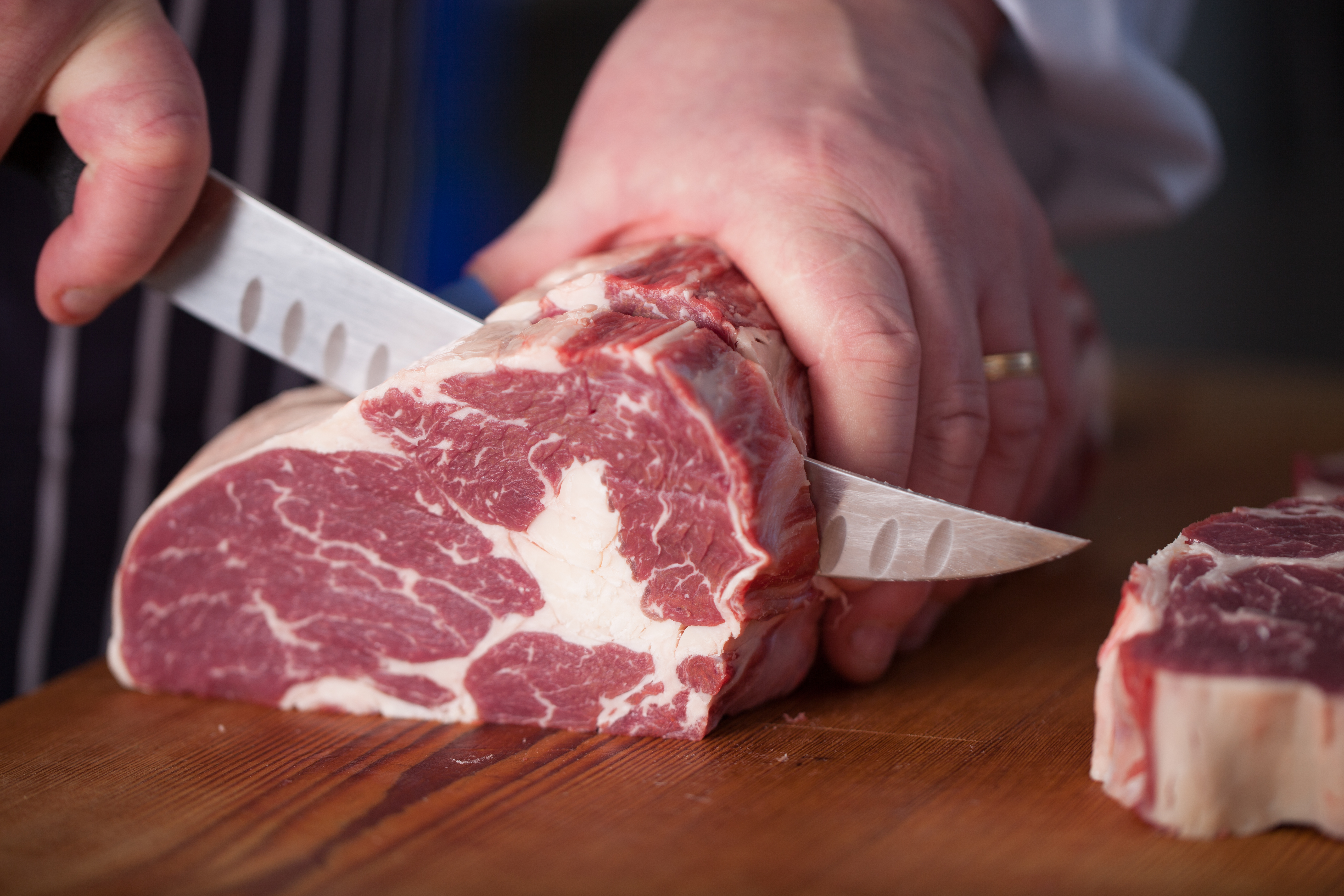 To be able to provide you with nothing but the best in our restaurants, we love building long-standing relationships with our suppliers. There’s a huge element of trust here: we have to know that the meat we receive will be consistently fantastic quality, expertly matured and cut, and reliably delivered.

Traditional craft butchery: why it makes a difference

There’s an art to proper butchery, and it’s one that’s in danger of being lost in these increasingly mechanised times. Donald Russell are proud to champion their ancient craft – in fact, they train up apprentices in their Inverurie butchery to ensure that the skills will not be lost to future generations.

A great butcher will always be fussy about the meat they select in the first place. Donald Russell insist on only using grass-fed, British beef and lamb, which has been traditionally slow grown on our wonderful native pastures. Grass-feeding is important for many reasons – it’s best for the livestock as well as the environment, and it produces meat with a flavour, texture and nutrient profile that simply can’t be found elsewhere.

Once Donald Russell have selected the very best (any that doesn’t meet their high standards is turned away at the door!) they then ‘hang’ it to mature. Maturation is vital to create a rich, deep, rounded flavour and succulent tenderness. It’s an expensive process, and many butchers cut corners here to save costs, but Donald Russell know that it brings the very best eating quality. Depending on the cut, their beef is matured for up to 35 long days – you can really taste the difference this makes.

Once it’s ready – and only the touch of an experienced butcher can tell you exactly when this point will be - Donald Russell cut it by hand. The butchers use skills learned over decades to get the very best from each individual cut of meat. Each piece is different, after all, and the butchers’ experience allows them to cut steaks and chops to within a few grams – purely by eye and feel! 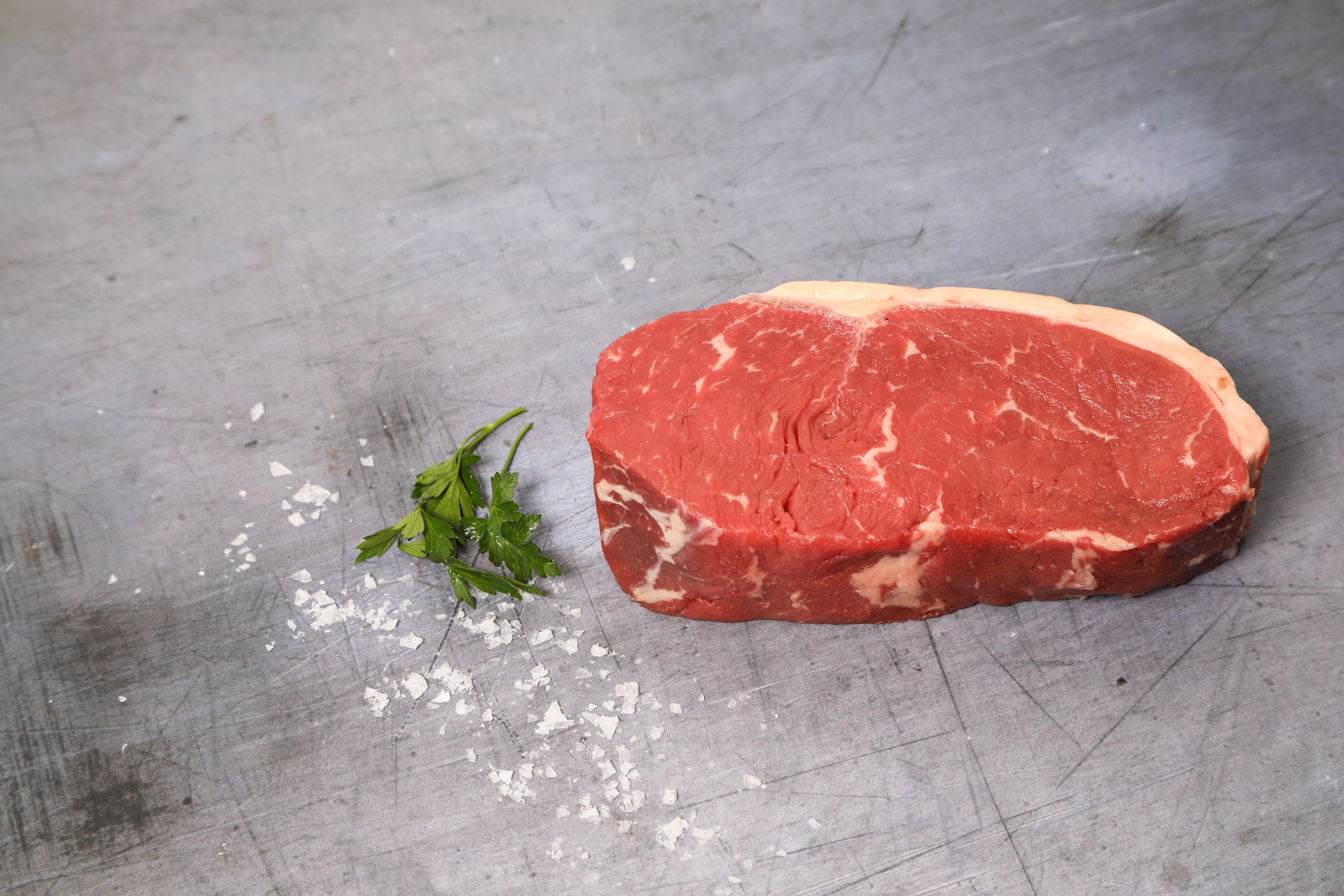 The steaks! Focus on Sirloin Steak

There’s a great story of a random English king (it varies from tale to tale) being so enamoured with this particular cut of meat that he knighted it, touching it with his sword and proclaiming ‘Arise, Sir Loin!’ Sadly, it’s not true, but we love the sound of it anyway!

Sirloin actually gets its name from the French surloine, meaning ‘beneath the fillet’, which is where it sits in the full side of beef. It’s also beside the ribeye, and as you might guess, it takes good attributes from both of these other delicious cuts.

Its flavour profile is nearly (but not quite) as rich and tasty as the ribeye, and it’s the most tender of all the premium steak cuts after fillet. In fact, many people consider sirloin to have the ideal combination of flavour and tenderness, which is why it’s known as the ‘nation’s favourite steak’.

Donald Russell mature their sirloins for a lengthy 28 days, to bring out both the depth of flavour and the succulent tenderness. Then they ‘special trim’ them, by hand, so that just an edge of tasty fat remains to keep them juicy as they cook. It’s little touches like this that let you know you’re getting nothing but the very best.

Take a sneak peek into Donald Russell’s video on how to cook the best steak here. 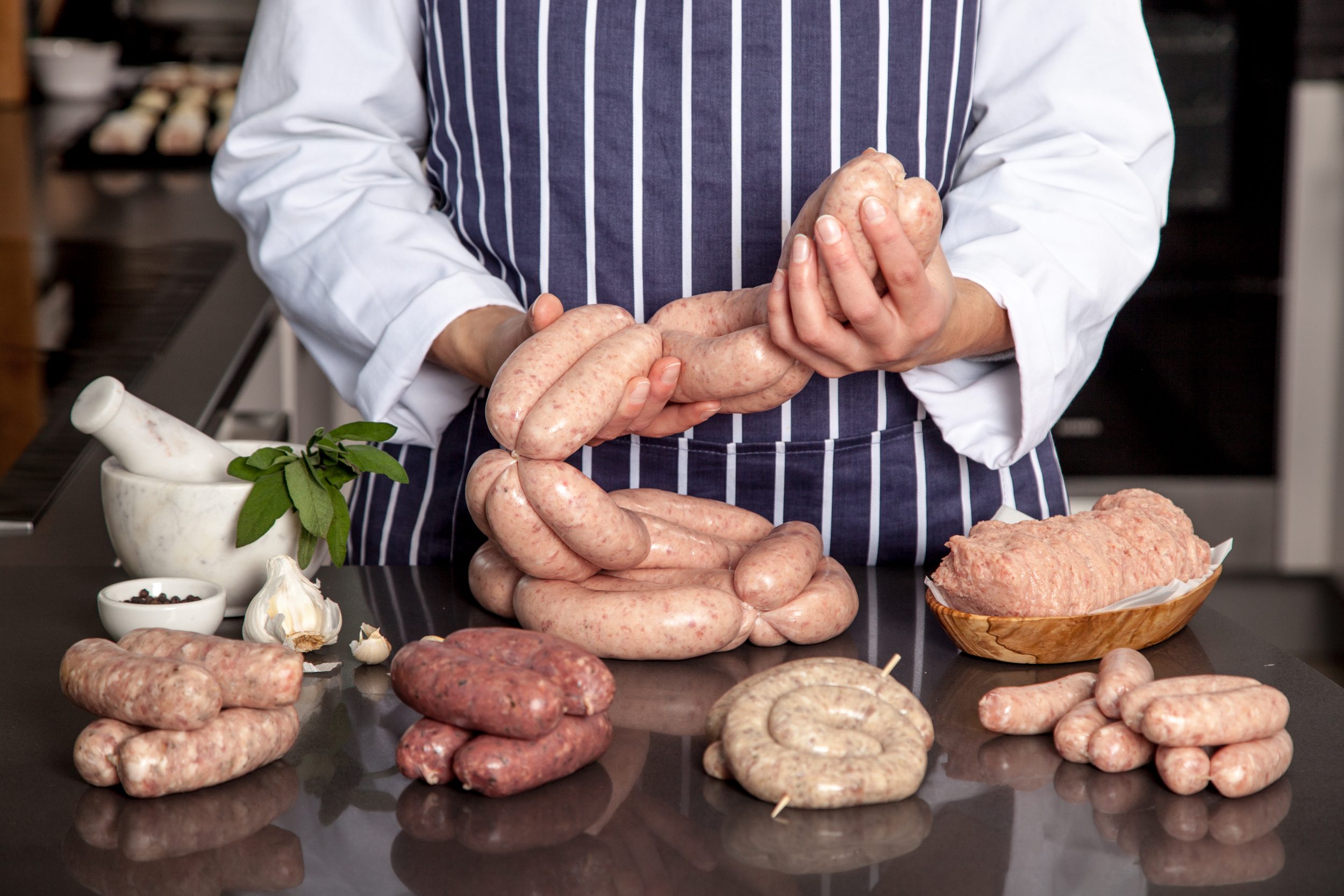 The sausages! Hand made for the very best quality

Donald Russell are rightly proud of their sausages. They’re all made by hand in their Aberdeenshire butchery, to their own bespoke recipes.

Their Head Butcher, Mark Farquhar, explains: “Some Butchers use a sausage as a place to hide bits of meat you wouldn’t want to use elsewhere. Not us! We use only premium pork shoulder – the same cut as you’d enjoy at home in a Sunday roast – and plenty of it. We fill our sausages into traditional natural skins, which are surprisingly rare in this day and age. They give a lovely ‘snap’ to the sausages as you bite into them.

“To me, a sausage is just as much a part of a Butcher’s art as the finest steak. That’s why we always go the extra mile to make sure that ours are crammed full of the finest meat, with a carefully blended mix of spice and seasoning added to each different type. We’ve got a huge range, from traditional British bangers to classic Continental recipes, which can be crammed with up to 95% pure meat.”

If you’ve ever been lucky enough to taste the sausages at a Hand Picked Hotel breakfast, you’ll have been feasting on the traditional Cumberland: a classic British sausage made with 80% pork shoulder, complete with a little extra kick of punchy black pepper. Delicious!