An intimate and elegant wedding venue close to home

Having decided on a more intimate wedding, Jo and Steve also wanted something that was sophisticated and local for them and their guests: Brandshatch Place Hotel & Spa in Fawkham, Kent, ticked all the boxes. “Having been together for 15 years and had two children, we decided it was time to complete our family by getting married,” explained Jo. “As soon as we got engaged in the October of last year I went on to A Kentish Ceremony website to find out when the next nearest wedding fayre was, and discovered there was one the following day at Brandshatch Place.”

Knowing that they wanted an intimate wedding and somewhere local to them and their guests, as well as a place for immediate family members to stay the entire weekend, Brandshatch Place satisfied all of their requirements.  “As soon as we saw it we fell in love. The grounds are beautiful and the interior of the hotel classic and elegant, which suited the style of wedding we wanted. The venue itself is relaxed, too, which was a big deal for Steve and I as we wanted everyone to feel comfortable. Oh, and the fact they had San Miguel on tap was a deal breaker for Steve,” laughed Jo. 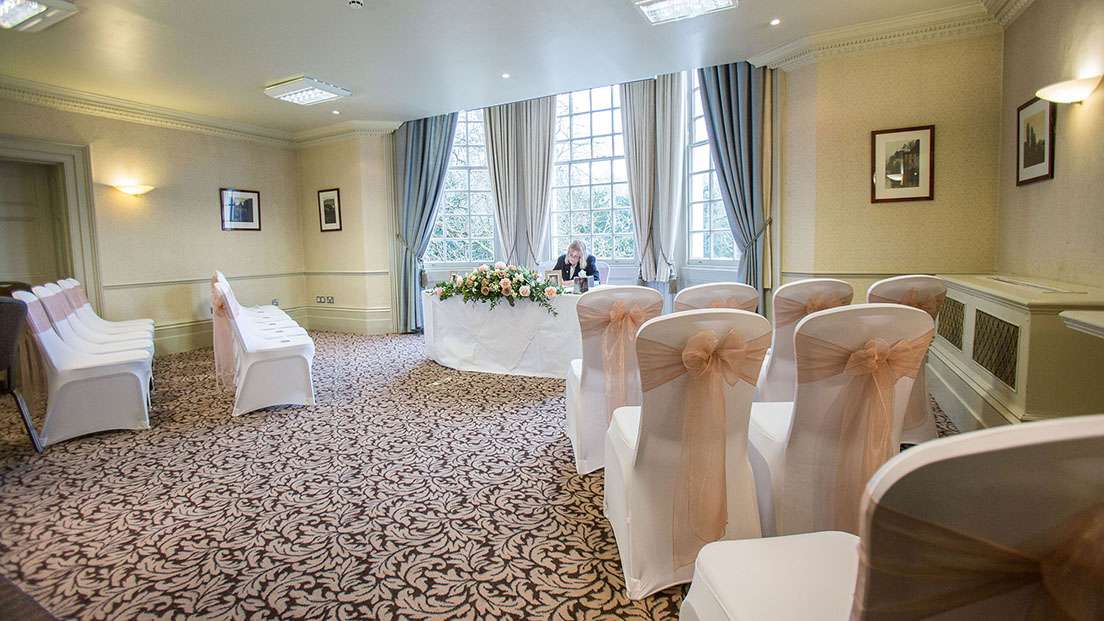 The next available Saturday was booked there and then, which meant the couple had just three months to prepare. Fortunately Brandshatch Place’s recommended wedding suppliers offered everything they needed and did them proud. “Special thanks must go to TDH Media, who were a great team and captured our day beautifully on DVD, as did Claire Sullivan from Unique Image Photography, who was the recommended photographer for the venue.” Flowers and Sparkle, who provided the flowers, also impressed with their professionalism, likewise Greenwich String Quartet, who played during the wedding breakfast, blew everyone away – most of all Jo and Steve’s daughter who just wanted to get up and dance.

“We also booked Singers in Disguise. The Suppliers, Steve and I were the only people to know about the singing waitress and I was on edge for everyone’s reaction. We only had 21 people at our wedding, five of them being children and the act went down a storm. My friends were wondering why this waitress had not brought the prosecco after asking her a number of times but soon realised when she burst into song. “Katrina was amazing, she got everyone on their feet and in the mood for the evening – even the staff at the hotel enjoyed it. We also booked our DJ, David Matthews, through the same company and we would highly recommend him, too.

“For the children we booked Froggles for an hour after dinner which was the best money we could have spent. The entertainer was great, the kids had so much fun, and what we really appreciated was the venue offered an additional room for the children’s entertainment so it didn’t interrupt the adults.” When it came to Jo’s dress, she had found what she wanted five years before Steve had even proposed. Unbelievably, when Jo rang the bridal boutique to see if it was still in stock, it was. “Sara from Together Forever was so creative and together we redesigned the top of the dress to create a lace overlay. She was experienced and friendly, and really went the extra mile for me. Together with my hair and makeup, which I had done professionally by Nicoll Moss, I felt like a million dollars.” The main importance of having an intimate wedding for Jo and Steve was that they could spoil their guests. Nothing was expected of them – not even a wedding present – moreover, the children were all catered for too, and all had a role to play. “It was important to us that this wedding wasn’t going to cost our guests any more than a cab home and an outfit. We didn’t even send out a wedding list. Moreover, we did not want parents to feel stressed so as well as supplying disposable cameras, sunglasses and inflatable musical instruments – among many other things – they were all a big part of our special day. “Our son Jenson aged seven was best man, our three-year-old daughter Ella was flower girl, together with my niece Ivy, my nephew Freddie was page boy, and Gracie, who is my cousin’s daughter, had the big responsibility of reading a poem in the ceremony, which was amazing. We all made some great memories with them that day and they still talk about it now.”

In fact, it is not only the children who have fond recollections of the weekend, Jo has many, as she revealed. “From waking up and having fun with my niece and nephew, who loved having a tour of the hotel, to my daughter running into the ceremony room and shouting ‘hello Daddy’ before looking round to see all these faces looking at her, to seeing Steve’s expression waiting for me at the end of the aisle, and lastly having a personalised poem written and read by my two oldest friends. Poor Steve had to follow with his speech, but he was witty as usual and made me very proud.” Above all, Brandshatch Place smashed their expectations, from the moment they arrived to the next day when they enjoyed a private breakfast with all the family and Jo’s ceremony flowers were put in the middle of the table. It also happened to snow which finished the weekend off perfectly.

“The attention to detail on every element of the day was impressive. They even left a teddy bear in our suite for when we returned to our room with our names and wedding date stitched in the back of its top, which was such a nice touch. The service we received made us both feel truly special and they couldn’t have done anymore for me and Steve and our guests.” Their special day was so perfect they have already booked to come back to Brandshatch Place next year to celebrate their first wedding anniversary.